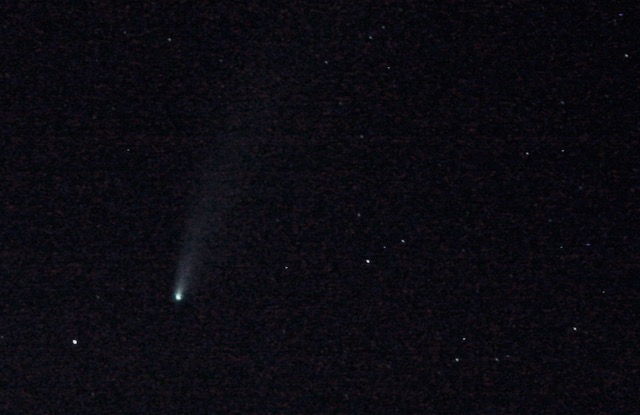 A green comet that hasn’t visited Earth in 50,000 years is expected make its closest approach in February, and you should be able to see it from anywhere in North Warren with a view of the north sky.

Comet c/2022 E3 (ZTF), or simply the Green Comet because of its distinctive green coloring, was discovered last March at the Zwicky Transient Facility in California. It made its closest approach to the sun this past Jan. 12 and is now headed for a rendezvous with our planet Feb. 2, passing within 26 million miles.

Because comets are notoriously hard to predict, it’s not known precisely how bright it will become. But it is expected to be visible with regular binoculars. Some experts have said it could get a bright as Comet Neowise, which was visible in the northern skies in July of 2020.

Jan. 21 will be one of the best times to find the Green Comet. There will be no moon to compete with the comet, and it will be easier to spot as it will be near the North Star. It willremain in the vicinity of the Big Dipper for several days after that. By early February the comet can be found near Mars and by Feb. 6 directly overhead about 8 p.m. although by then the moon could interfere with viewing.

Now, before you say, “I can barely find my own street on a map. How am I supposed to find all these stars and constellations?!” Fear not. There are many easy-to-use star- and planet-finding apps to be found. Night Sky is a popular app that is free.

Comets have been described as “dirty snowballs” that cruise around the solar system, sometimes with orbits that take hundreds of thousands of years. When they get close to the sun, they heat up and start spewing gas and dust that is propelled by solar winds. This is the tail we see. The tail always points away from the sun so when a comet is on its way back to deep space, the tail precedes it.

The celestial bodies contain water, ice and other elements that scientists believe are the building blocks of life on Earth.