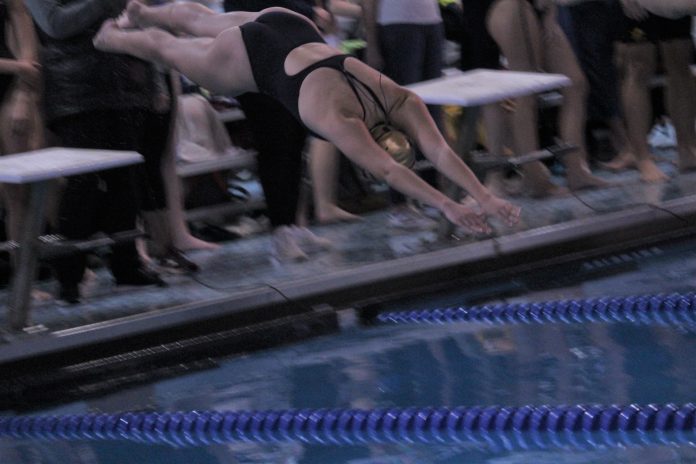 The Pope John Lions swimming teams defeated Newton/Lenape Valley on Dec. 13 to open their seasons with a 1-0 record. The boys won by a score of 135-34 while the girls won by a score of 121-49. The Lions controlled the pool at Kittatinny Regional High School, opening their 2022-23 season with a very positive beginning.

The boys got off to a good start with first and second place finishes in the 200 MR (medley relay). Senior Jacob Panzarella, freshman Hunter Gallo, senior Alessio Orlando and sophomore Kai Batchelor finished first with a time of 1:45.52 while sophomore Christopher Gutierrez, seniors Jacob Pacholarz and Colin Diamond, and sophomore Kyle Sobcyzk finished second with a time of 1:50.45. Batchelor, Gutierrez and Gallo all would place first, second and third in the next event which was the 200 free.

Gallo is happy to be a part of a very successful program and wants to challenge himself even more as the season progresses.

“The team got off to a good start with this meet. We’re definitely a strong team, and I can’t wait to see what we can do once HWS (Hunterdon-Warren-Sussex) rolls around,” said Gallo. “It’s amazing that I can compete with top kids. It gives me confidence while also helping the team win meets.”

The girls had a younger team than the guys did, but that didn’t stop them from dominating Newton/Lenape Valley. The girls started with a first place in the 200 MR with a time of 1:58.40. Senior Abby Panzarella, sophomore Sofia Keller, senior Leah Bauder and freshman Maria Schnabel gave the Lions a good start to the meet. Schnabel and Abby Panzarella would place first and second in the next event which was the 200 free. Panzarella also placed first in the 100 free later in the meet.

“The seniors don’t care as much about winning as we do as having the team come together as a family,” said Panzarella. “The biggest thing is to have fun. Before the meet against NLV (Newton/Lenape Valley), we told the younger girls that it’s okay if we lose. In the end, we won and everyone had a great time while racing very well.”

The boys would finish with a total of 135 points at the end of the meet because as the meet progressed, the team’s seniors became a big factor in gaining points. Seniors JJ Kane, Eric Vargas, Henry Bysshe and Orlando would all help get first place finishes in the 50 free, 100 fly, 100 free and 200 FR (free relay).

Kane was very pleased with the performance of the team and knows that with the experience that the team has, they will have another successful season.

The girls finished with 121 total points with the younger girls getting first place finishes to help the team keep ahead of Newton/Lenape Valley. Freshmen Charlotte Feng, Madelyn Ball and Madeleine Leonard placed first, second and third in the 100 back.

It was an all-around good meet for the Lions and Assistant Coach Bianci Wargo felt very proud of the Lions for opening their season in a very successful way.

“I think they did great, especially for it being the opening meet,” said Coach Wargo. “The goals for this season are for them to accomplish their individual goals and even surpass them. As long as they put their mind on obtaining those goals, they can obtain them. I know they can.”