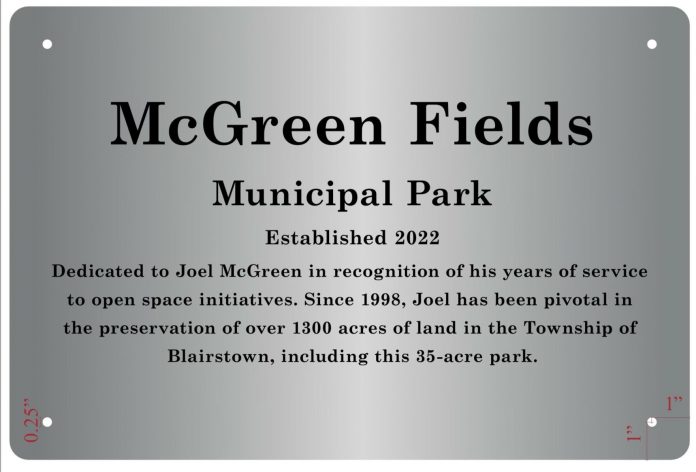 Joel McGreen received a standing ovation at the Blairstown Township Committee meeting on Dec. 28 after receiving recognition for his service to the Open Space Committee. In his honor, the new 35-acre park located behind the library on Lambert Road will be named the McGreen Municipal Park.

Speaking to McGreen, Mayor Robert Moorhead said, “When we look back at your career as the head of open space, it’s extremely impressive.”

McGreen has helped preserve more than 1,300 acres of open space in Blairstown, equating to about 2.03 square miles. Mayor Moorhead presented McGreen with a plaque that will be mounted to a large stone placed at the entrance of the park.

“This plaque will outlive anyone sitting [on the Blairstown Township Committee] right now,” Moorhead declared.

Responding to this recognition, McGreen said, “Thank you all and thanks for being supportive so that Blairstown can be as beautiful as it is.”