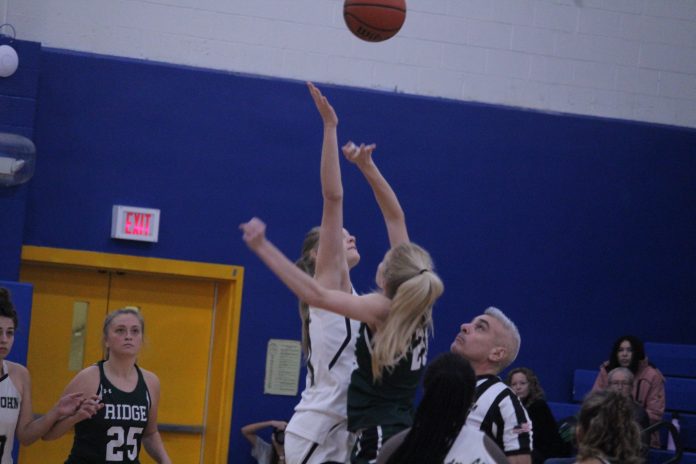 The Pope John Lions girls basketball team went into their first game of the Mount St. Dominic Holiday Tournament with their heart set on coming out with three wins. Already on a three-game win streak entering the tournament, the Lions would continue their momentum by defeating their opponents by 30 or more in two of the three games to win all three games in the tournament.

The Lions came out of the Christmas break with a matchup on Dec. 26 against the North Hunterdon Lions. This would be their toughest game of the tournament as North Hunterdon put up a good fight but would fall 42-37 to Pope John.

Freshman Mia Washington would be the star in this game with 10 points, five rebounds, three assists and four steals, and she would continue to help Pope John in their next two games.

¨We all work together well, bring hustle to every game, and we bring energy to every game,” said Washington. “I think by bringing effort to the team, I contribute in a way that helps my teammates find the effort we need to win games and vice versa.”

On Dec. 28, Pope John faced off against their second opponent in the tournament, the Academy of Saint Elizabeth Panthers. Behind Washington’s 16 points and a combination of junior Madison Miller’s 12 points and freshman Addison Platt’s 12 points, the Lions defeated the Panthers 62-29. Defense was a big part in this victory, explained Lions Head Coach Kevin Houston.

On Dec. 29, the Lions faced the host of the tournament, the Mount St. Dominic Lions. Pope John would repeat their performance on both the offensive and defensive side of the ball as they defeated Mount St. Dominic 66-30. Washington led Pope John in points with 12 while Miller scored 11 and earned 12 rebounds.

Miller was very pleased with the performance of Pope John during the tournament, especially since their record was now 6-1 heading into the new year of 2023.

“The first game of the tournament, we didn’t play well even though we won by five,” said Miller. “Coach used that game as a learning lesson which has propelled us to win games and play good defense.”

With a lot of new players to the team, Pope John had faced adversity entering this season, but sophomore Katie O’Keefe and the team have proved that they are ready for any challenge that they may face.

“Games like the North Hunterdon win help us to grow as a team and become better players,” said O’Keefe. “As a younger player, I know I can look up to players like (seniors) Kylie Squier and Maddie Rento and Miller because they have a couple years of experience at the high school level.”

Coach Houston was very proud of the girls and how they have been able to meet the challenges they have faced so far with excellent play.