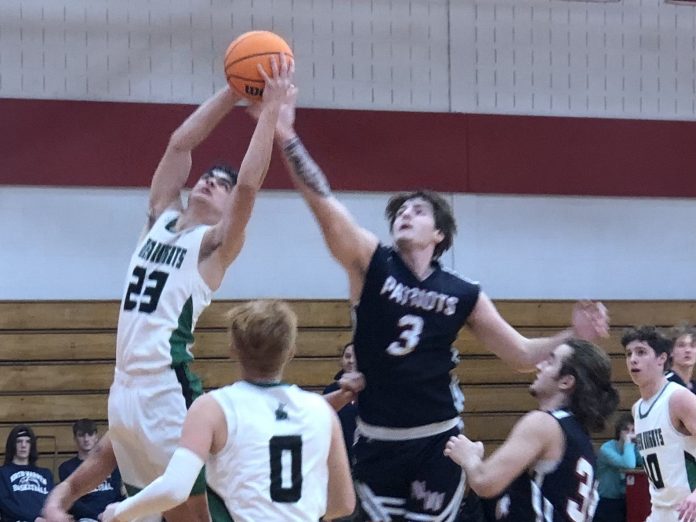 Christian Otufale’s three-pointers weren’t enough for North Warren Regional to prevail over Pen Argyl in the first round of the holiday break Belvidere Tournament at Belvidere High School Dec. 27, but they came back the next day defeating the host team Belvidere County Seaters in a 77-26 blowout.

In the Dec. 27 game, the Patriots fell 50-36 being outplayed particularly in the third quarter.

“We had a tough third quarter,” said head coach Rob Steingall. “It goes down to they made the shots, we didn’t.”

Nevertheless, Steingall said he was pleased with the effort his team put into the game against the generally taller Pen Argyl team. He said the team played strong in the first half.

“We stayed pretty competitive in the first half,” Steingall said. “We’re a developing team, we’re trying to improve on last year. We’re making progress one day at a time.”

“Craig Shipps has been an animal,” Steingall said. “We wouldn’t be competitive without Craig.”

On Dec. 30, despite putting 65 points on the board, North Warren lost to Delaware Valley 85-65. In that contest, Luke Stefankiewicz scored 22 points, including a trio of three-point shots. Shipps scored 14 and Otufale put 10 points up.

The Patriots open 2023 at Kittatinny Regional Jan. 4, taking a 2-5 record with them.