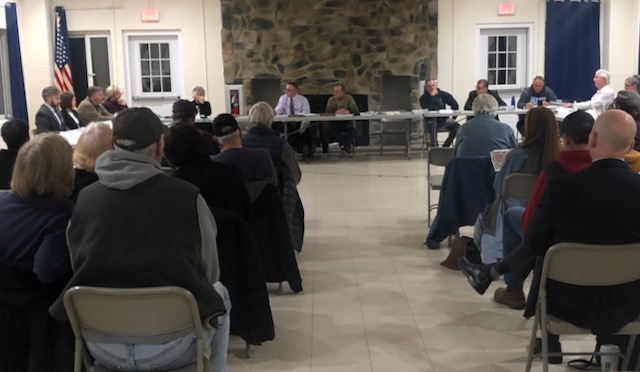 A cannabis farm in Frelinghuysen moved one step closer to reality when the Township Land Use Board approved a use variance that would permit cultivation on the Kerrs Corner Road
property.

The next step will be the submission of a site plan, which will be subject to approval by the
board. Anticipating a larger-than-usual larger-public turnout, the Dec. 5 Land Use Board meeting was moved to the Frelinghuysen Township Recreation Center, where the board held a third hearing on the application for cannabis cultivation by Veda Farms LLC.

About 30 people were in attendance, with those commenting publicly about evenly split
between those in support for the farm and those voicing concerns.

One of the major issues being the smell of the plants, particularly after they have flowered.
Smrita Choubey, the founder and CEO of Veda Farms, which has proposed the farm, said that the cannabis plants would occupy only a small portion of the farmland and would be surrounded by a buffer zone. She said of the 250 acres of the existing farm at 175 and 201 Kerrs Corner Road, 80 acres would be used for crops such as flowers, herbs and food crops with 3.4 acres pegged for cannabis.

Choubey said there are ways to mitigate excessive aromas, such as spraying water on the
plants. She added that the other plant types on the property will also contribute to the smells from the farm.\

“All of them have distinctive odors of their own, and the agricultural crops that have the most distinctive odors include things like lavender, marigold, sunflower, chamomile and then, of course,” Choubey said. “The reason we’re growing all of these herbs, is that we a
holistic health company.”

“The cannabis area would be surrounded by an eight-foot fence,” she said, and the farm itself would not be open to the public. The cannabis produced on the Kerrs Corner Road farm would be harvested once a year, then packaged onsite to be shipped to other companies that would distribute the product.

She added that the production, distribution and sale of cannabis in New Jersey is heavily regulated and monitored at every step in the process.