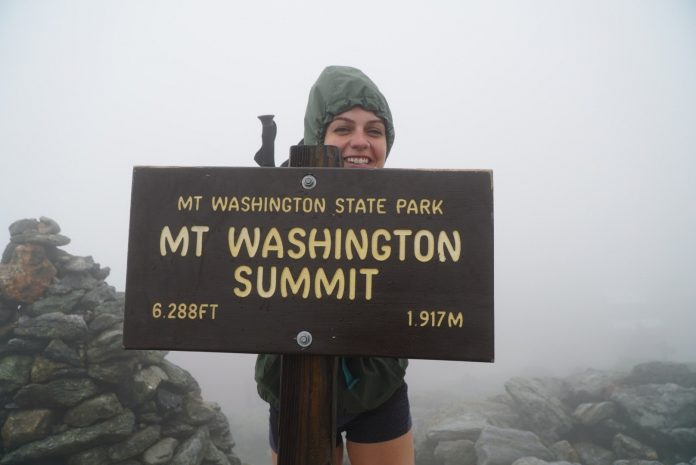 Kelly Molinare has always had an independent streak in her, from growing up in Blairstown and hiking the trails of the Delaware Water Gap, climbing mountains, from living on her own (with her sister) as a teenager, working full-time to support herself, and making what some people might think are risky life decisions about one’s future.

The recent Warren Community College graduate is not just independent, but confident, as she reaches for new heights, in many ways, every day.

“I began providing for myself at 18 when my mother sold her house in our hometown and ventured out of state,” said Molinare, who now lives in Hackettstown. “Since I was beginning my senior year of high school, the thought of moving to another state and starting over was not an idea I really wanted to entertain. To stay in New Jersey, my sister and I got an apartment together as she was fresh out of college, entering the workforce for her degree, and I was still on a path to figuring out my future.”

Molinare graduated from North Warren Regional High School in 2015, made her way into the job market, and later began bartending, which she still does. It took awhile before college entered her plans.

“I have been able to live on my own and navigate the ‘real world’,” said Molinare, noting that friends and family did help by providing support. “I think that is why it took about five years to decide to go to college. When you don’t have the cushions of someone helping you provide for yourself, you learn what you must do to keep your head above water.”

Molinare allowed herself time to think about her future while out of work during the height of the COVID-19 Pandemic. That led her to Warren Community College these past two years where balancing classes with her job schedule worked out for her. Molinare also found time to be a chemistry tutor at the college. At this year’s commencement in May, Molinare graduated with an Associate in Science in Environmental Studies degree and was the Student Speaker.

“When I was preparing to write my commencement speech, much of the inspiration came from many interactions I had while I was tutoring on campus,” she said. “It’s easy in a small or large school to see each face you pass by as blurring and blending in with everyone else’s. But it was during my time tutoring that I was given the privilege to get to know a lot of people there more personally. During that time, I came to know many faculty and staff members, learn about their past college experiences and current life experiences as well as the hardships they have faced and overcame. This was also true of many of my peers that I was tutoring. Not only was I a tutor, but sometimes I became a confidant for them in their personal endeavors. I hadn’t realized how many students here sometimes just needed a safe space to talk about their issues in school and their personal lives.”

“That was when it occurred to me that everyone, even those who appear to have themselves very well put together, battle daily struggles much like the ones I face.”Molinare continued, “When I finished my speech at graduation, a few people came up to me after and thanked me for what I wrote, and a few others also told me they had begun to tear up because I was able to give their struggles a voice. I think that in society we are conditioned to believe that a community college graduation isn’t something to be proud of, because you aren’t doing it the ‘right’ way. That was true for me at least, I felt embarrassed at first to be attending college at 23 years old, feeling very behind of my peers and that I was ‘running out of time.’ A friend once told me, ‘We’re all in a rat race, but to where?’ and I live by that statement currently. There is no time limit on your present and future, and every step you take is a step forward and that’s what matters the most.”

This fall, Molinare;s plans were to continue to work while attending Kean University where she is pursuing a bachelor’s degree in Chemistry and ultimately, an end goal to obtain a masters in Organic Chemistry and work within an environmental field.

“After my bachelors I would love to have the opportunity to work in a laboratory setting,” she said. “That is one of my favorite parts of studying chemistry.”

In the meantime, nature continues to be her passion. An avid painter, writer, foster cat volunteer, it is the wilderness that often drives Molinare to (literally) new heights. One of her life goals is to climb the highest peak in every state. She’s got a pretty good start on that goal.

When it comes to hiking mountains Molinare admits that sometimes it can be very challenging. She relates that during one hike, on Mount Abraham via the Long Trail in Bristol, Vermont (peak elevation of roughly 4,006′), there was the ultimate in challenges. “I blew both of my heels out in my boots hiking the day before by not doubling up on socks (rookie mistake and I knew better). About 1/4th of a mile into the 5.1 mile Long Trail hike, I had to take my boots off but refused to end the hike so I went the rest of the way essentially barefoot.”

Of course, most hikes aren’t that challenging!

Molinare added, “My favorite part of being in nature is that it forces you to confront yourself, in a calming way. My motto is ‘I hike for validation, not views,’ and use the time spent in the wilderness to reflect and confront issues I may be facing within myself. If I am hiking up a very big mountain, I depend on overcoming the obstacles in front of me physically, as well as mentally to complete the hike. I use the time to process and reflect, as well as critically think and get to know myself better.”

If becoming a chemist and climbing mountains isn’t enough, Molinare has one more goal in mind.

“I want to open an animal sanctuary for cats and dogs to have a place to live comfortably,” she said.

Kelly Molinare has plenty of goals on her radar and no doubt that if there is one person who can obtain them all, it is her.