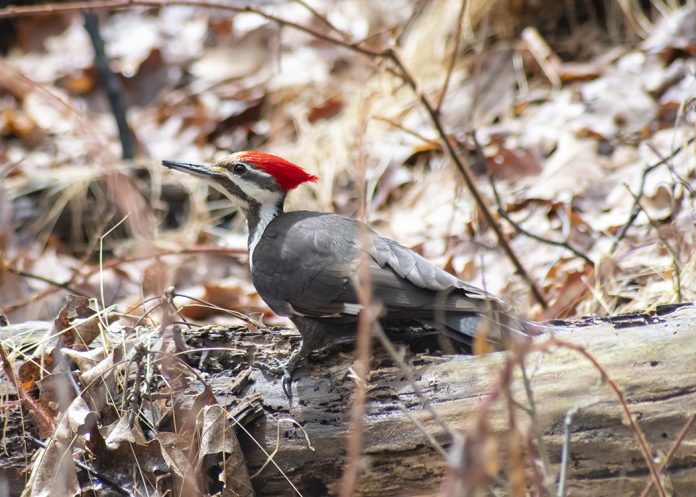 A winter hike in the woods finds trees bereft of the colorful songbirds who populated the forests only a few months ago. Gone are the flute-like songs of the wood thrush, the “teacher, teacher” calls of the ovenbird and the melodious tune of the grosbeak, for they, along with others, have migrated south for the winter.

Woodpeckers have an ancient lineage that separated from other birds around 24 million years ago. This striking woodpecker gets its name from the bright red crest that covers the pileum, or the top of their head. They are most likely heard instead of seen, but if you are fortunate enough to catch a glimpse of one, identification is easy.

Pileated woodpeckers are big, about the size of a crow. They are mostly black with a white stripe running down their throat and of course, the shocking red feathers that adorn the
top of their head.

Pileated woodpeckers mostly inhabit old-growth forests and woodlands. When one is this big, one needs big trees to roost inside of! Dead and dying trees are their specialty and they depend on them, not only for food but for a nesting cavity.

Woodpeckers typically excavate only the entrance hole to gain access to the hollow interior of a dead tree. This in turn conserves energy because they do not need to excavate the interior of the tree.

Pileated woodpeckers’ mate for life and though they share territories with their mate, they have separate bedrooms, often in the same tree. These separate roosting cavities are probably due to their large size.

There is no mistaking the call of a pileated woodpecker. The rapid “cuk-cuk-cuk” shrieks they make in flight almost resemble a disturbing laugh, one that was often used in old jungle movies.

Those calls are not their primary method of communication with other woodpeckers though. Woodpeckers communicate, defend their territory, and also attract mates by drumming, and each different species of woodpecker has a drum that is unique to them.

According to the Audubon Society, “Pileated Woodpeckers drum slowly, accelerating and then trailing off at the end, distinguishing them from most other woodpeckers that drum at a steady rate. They can drum close to 17 beats per second and will perform 10 to 30 beats before they take a break.”

While this is all “well and good,” one may find themselves asking, besides being pretty, what good is a pileated woodpecker? Turns out they are a lot of good! Over half of their diet is comprised of carpenter ants along with wood-boring beetles.

It has been noted that pileated woodpeckers’ numbers increase in areas infested with emerald ash borers. This suggests that they could be a strong line of defense against
non-native invasive species. Pileated woodpeckers are also considered a keystone species meaning “a species on which other species in an ecosystem largely depend, such that if it were removed the ecosystem would change drastically.”

Nest cavities are rarely reused by pileated woodpeckers, but the holes provide essential nesting and roosting places for many other species, including the Wood Duck, Eastern Bluebird, and Eastern Screech-Owl, as well as bats, squirrels, raccoons, and other mammals.

Eating ants and providing homes for other animals is not the only service they provide. Their excavations remove a vast amount of wood from dead trees, speeding decomposition and nutrient cycling.

Sure, some amazing looking birds have temporarily left us for the warmer climate to the south, but we are fortunate to still have year-round residents that are simply incredible and worth discovering!