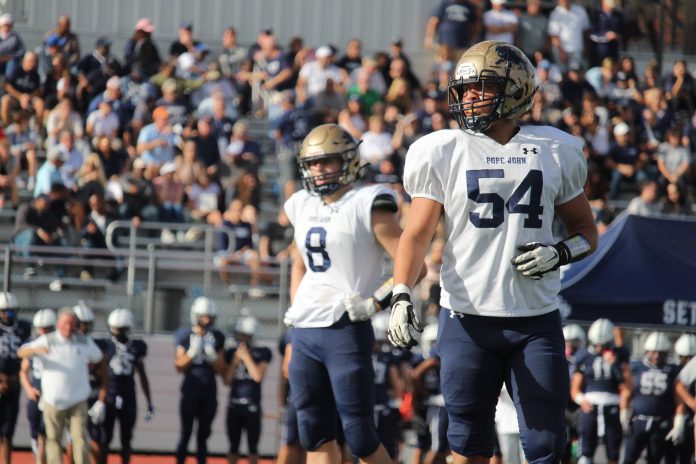 The Pope John Lions football team continued their struggles as they neared the end of the
season, finishing on a 4-game losing streak, but they entered their State tournament game against the Seton Hall Prep Pirates with the mentality that they were going to win.

Unfortunately, the Pirates had other plans, and the game would end in a 42-13 defeat for the Lions which officially ended their 2022 season.

The Pirates received the ball first which led to a dominant touchdown drive, giving the Pirates a 7-0 lead. The kickoff after the touchdown was a disaster for the Lions. Sophomore Tylik Hill was nearly tackled in the endzone for a safety. This began the Lions drive on their own 2-yard line.

A couple plays later, Lions´ Junior kicker Jack Morgese punted the ball away. The Pirates
took a 7-0 lead to the end of the 1st quarter. With the Lions making no progress down the field, Morgese once again punted the ball, and the result was a touchdown by the Pirates on the next drive, extending their lead to 14-0.

The Lions would not quit, however, as they answered with a touchdown of their own. Hill received a short pass from Junior quarterback Chris Dietrich, and then proceeded to find a gap in the Pirates’ defense to reach the endzone 33 yards later. Morgese added the extra point to shorten the Pirates´ lead to 14-7.

This would be a very short-lived victory for the Lions as Pirate Senior defensive back Darren Burton II returned Morgese´s kickoff to give the Pirates their 14-point lead back at 21-7. With less than 30 seconds left to play in the 1st half, the Lions were scored on again, making the halftime score 28-7 in favor of the Pirates.

Lions Head Coach Dom Gaston wasn’t happy with the team, and that was because the team wasn´t performing how he knew that they could. Coach Gaston told them to get their heads up and focus on playing a game that they know how to play.

The 3rd quarter would bring more defensive collapses for the Lions as Pirates Junior quarterback Liam Londergan ran for 2 touchdowns that were both over 25 yards. After 3 quarters, the Lions were down 42-7.

At this point, the Pirates took out their starters and gave Underclassmen a
chance to play. On the final play, Dietrich found Lions Junior wide receiver Charlie Mulligan on a 45-yard touchdown pass. This ended the game, with the Pirates winning, by a score of 42-13.

Coach Gaston was frustrated with how the game turned out because he knew how much potential this team had to do great things in the state tournament but was happy to see the team had an overall good season.