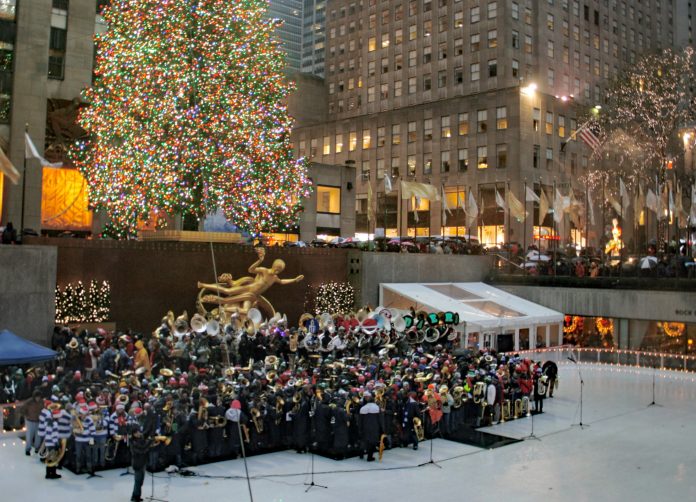 It’s that time of year again when otherwise clear-thinking adults from the suburbs and rural communities seriously consider throwing caution to the wind and heading to the bright lights of a New York City Christmas.

You may look out your window and see verdant forests, rolling pastureland or your neighbor’s garbage strewn across your lawn by the bear. But in Warren County, we live just over an hour from the Greatest City in the World. And I say that with minimal irony. Except for the maybe the North Pole, no place comes close to a Big Apple holiday pilgrimage.

But there are a few things the uninitiated should know. I have worked and occasionally lived in New York for more than 30 years, so I’ve learned a thing or two.

First question you might ask. “How do I get to New York?” Soon Amtrak will be arriving in Blairstown. But not this Christmas. Or the next one. Or the one after that. But you could take New Jersey Transit from Dover, which will bring you directly to the basement of Madison Square Garden, also known as Penn Station.

Except for Macy’s, there’s not a whole lot to do immediately around Penn Station. You may want to go Uptown. On the Subway. At Penn Station you can catch the 1, 2, 3, A, C, E, B and F. If you walk through Macy’s you can grab the R, N and Q, also known as the Broadway Line. Except the Q train swings east to the new Second Avenue Line, which took 60 years to build. For real.

But, actually, forget all that. All you really need to know is that Uptown means north, and Downtown means south. There are trains that go east to gentrified neighborhoods and further east to bad neighborhoods waiting to be gentrified, but you don’t want to go there.

Say you want to visit Times Square? And I endorse that idea. People say it’s a shlocky, tacky tourist trap. Like Vegas without the good taste. Just remember: Nothing is free in Times Square. If offered a “free” CD, say no. If offered some sort of “free” religious medallion, say no. They’ll hound you all the way back to Macy’s for money.

Same for photos with Elmo. If you want to get you picture taken with a six-foot, scarlet shag carpet, go ahead. Don’t forget to tip. Suggested minimum is $5 per person. You would believe how fast Elmo can turn psycho.

Try to keep a game face on. No matter how hard you try not to, you’re going to telegraph Bridge and Tunnel to the various hustlers and buskers but if you don’t engage in direct eye contact, they’ll likely move on to other more agreeable pigeons.

If you want to get a classic dirty water hot dog or a garbage can lid pretzel, check for posted prices. If you don’t see anything, ask.

Funny story: A while back when my kids were still kind of small, my wife dropped them off at my office, and I took the afternoon off to just walk around. We stopped at my regular pushcart for pretzels…and I was charged twice the price!

Apparently, my pal Nadji just saw the kids and assumed we were tourists. “Yo, Nadji, what the hell?!? It’s me!”

Soon the time will come to head home, and you must reverse the transportation process. If you took the train, you might be asking yourself, “Why didn’t we just drive?” And I have to agree. If your visit is to a limited area, say Rockefeller Center, you might do well to drive.

Settling into your warm car at a parking garage beats trying to get a cab or taking the subway back to the train station, where you have to wait to be herded like cattle. Just keep in mind, Midtown parking has bankrupted small nations.

A word on street parking: Unless the red and white sign says “[Your name] can park here on the Dec. 1, 2022, from 4 to 11 p.m.” don’t even think about parking on a Midtown street. You WILL get a $500 minimum fine and likely get towed. That’s a nightmare you don’t want with two tired children.

Also—and this is. Important—make sure you know if the garage has a closing time. Not all of them are open 24 hours. And don’t forget to tip.

Pro tip: Speaking of Rockefeller Center, don’t go within 12 miles of it the night they light the Christmas Tree (Nov. 30th, for 2022). Year after year, tens of thousands of Bridge and Tunnel people flock to the area hoping to see the lighting only to be shunted into pens where they might see the event on a jumbotron.

We made this mistake carrying two toddlers out for the Christmas Spectacular, having to navigate three blocks against the current of people. Actually got a little scary.

But don’t let that put you off. Visit New York! Just remember to tip. Everyone.