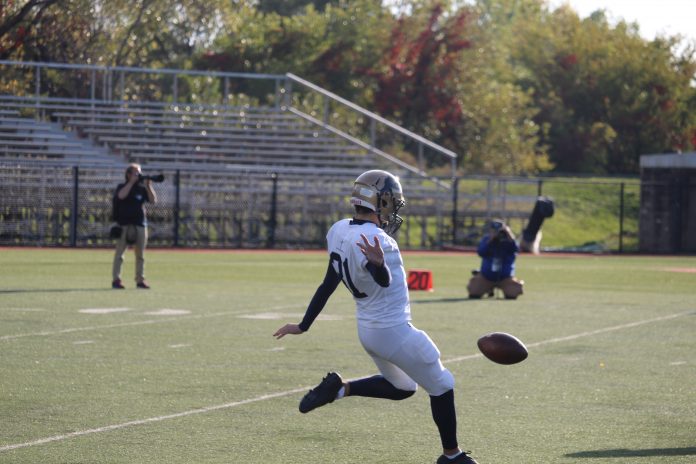 The Pope John Lions football team weren´t headed for a good ending of their season as they neared the final game of the regular season. The team, already on a 3-game losing streak, wanted to get a commanding win over the St. Joe´s (Metuchen) Falcons on October 29th, but this wouldn´t be the case as the Lions defense were unable to stop a Falcons score in the final minutes, giving the Falcons a 21-20 lead. The game was officially ended when Lions Junior quarterback Chris Dietrich threw an interception with under a minute left to play.

The Lions were down early as the Falcons scored a touchdown in the 1st quarter to make it 7-0 in favor of the Falcons. The Lions couldn´t find a way to put points on the board in the 1st quarter, but scored a touchdown early in the 2nd quarter to cut the Falcons lead down to 7-6. However, Lions Junior kicker Jack Morgese missed the extra point which would be one of the many crucial mistakes made by the Lions in the game.

Though this miss would help give the Falcons the win in the end, Morgese has been an amazing kicker this season, hitting field goals or extra points at critical moments of games. The Falcons led 7-6 as the game headed into halftime.

The Lions came out in the 2nd half with energy. Junior Charlie Mulligan capped off a great drive with a touchdown catch on a good pass from Dietrich. With this, the Lions led 12-7, after a failed 2-point conversion. Mulligan was pleased with how the offense had strung together multiple good plays during the drive because it reminded the team how good their offense could be.

¨Our offense came together for a few of the drives,¨ said Mulligan. ¨Ball movement was very good and being able to run different plays that worked when in other weeks it hadn´t. It was good to see that our offense wasn´t deflated after many weeks of struggling.¨

With momentum the Lions defense looked to initially stop any chance of Falcon comeback until a 55-yard touchdown pass by the Falcons gave them a 14-12 lead. The Lions, led by Sophomore running back Tylik Hill, stormed down the field and scored to regain a 18-14 lead. Hill added to this lead by converting the 2-point conversion, making it 20-14 in favor of the Lions.

With time winding down, the Lions defense once again failed to make a stop, and the Falcons scored another touchdown, adding the extra point to give them a 21-20 lead. The Lions had one final chance to score, and this only had to be a field goal. Given how well Morgese had kicked this season, and the range that he can kick, the Lions didn´t need to travel very far, but Dietrich´s interception would seal the win for the Falcons, ending the Lions´ regular season with a record of 4-5.

Lions Head Coach Dom Gaston was frustrated with how the team was unable to comeback and win the tight games that they had been able to win earlier the season. Coach Gaston knew this was a learning experience for the young team, and found many positive things after watching film of the game a couple days later.

Mulligan and his teammates were disappointed with the loss, but knew that it was a learning experience for when the team is in a final drive, so next time they can connect to earn the victory.

¨We need to remember that we´re on the same team, and that means we´re all striving for one goal: to win each game, 1 at a time,¨ said Mulligan. ¨Coming together as a family instead of point fingers to blame each other is something that we can definitely work on, but we also have at the same time.¨