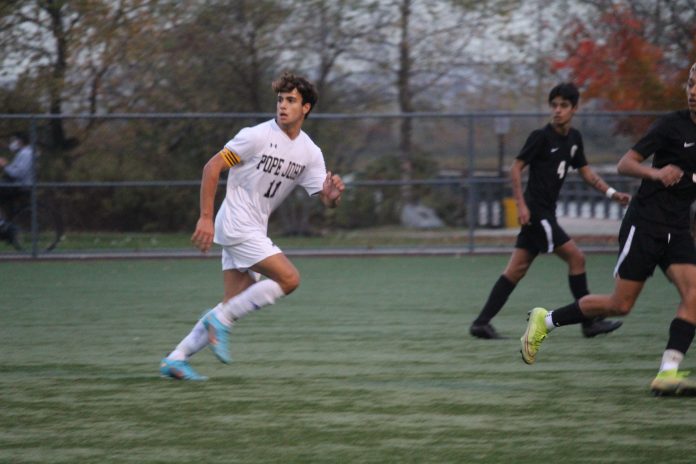 The Pope John Lions boys soccer team didn´t have the season they had hoped for. After going 1-0-1 in their preseason scrimmages, the Lions were ready to face their opponents, but things would go south quickly. After a 17-game regular season, with 2 of those games being part of the HWS (Hunterdon-Warren-Sussex) Tournament, the Lions finished with a record of 5-11-1.

The Lions would regain their confidence with a 2-1 win over the West Morris Central Wolfpack on September 10th, but it wouldn´t last as they dropped their next 3 of 5 games, adding a 0-0 tie to the Blair Buccaneers and a 3-2 OT win over the Irvington Vikings.

The Lions most emotional loss would come to the hands of their biggest rivals, the Sparta Spartans on September 15th. After a great game from the Lions, the Spartans would score a goal in OT that crushed the spirits of the Lions. With this 1-0 win, the Spartans would defeat the Lions again on October 6th at Pope John by a score of 2-1; this time in regular time.

After the 2nd loss to the Spartans, the Lions played an amazing game in a 1-0 loss to the Randolph Rams, leading into the HWS tournament. The Lions would not continue their strong play as, though they defeated the Warren Hills Blue Streaks 5-2 on October 10th in the 1st round of the tournament, the team did not play well. 2 days later, the team played it´s hands down worst game of the season in a 3-0 loss to the High Point Wildcats in the 2nd round of the tournament.

The Lions would not play again for another 9 days which gave the team time to get their game together as they would win their next 2 games on back to back days. On October 21, the Lions defeated the Jefferson Falcons 2-0 followed by a 2-0 win over the Wolfpack the following day. The win over the Wolfpack came on the Lions´ Senior Day which Senior centerback Jacob Burns and the team were especially proud about.

¨With it being Senior Day, it was a really important day which allowed everyone to be on their game,¨ said Burns. ¨We really, really wanted the victory as a team which allowed us to work together, play hard, and earn the victory.¨

Things would turn sour as 2 days later, the Lions would finish their regular season with a 6-2 loss to the Morris Hills Scarlet Knights. However, the Lions looked forward to their 1st round state tournament game against the Hudson Catholic Hawks on October 31. Junior forward Stevan Patino was happy how the regular season ended and wanted to see the team carry that momentum into the state tournament.

¨Defeating Jefferson [the Falcons] and West Morris Central [the Wolfpack] gave the team confidence and mentality it needed to play how well we did in the state game,¨ said Patino. ¨We had a lot of new faces, a lot of young players which led to not having the season we wanted, but it gives us motivation to prove how good this team can be as we look forward to next season.¨

This game would end in more heart break for the Lions. With a 1-0 halftime lead, thanks to Senior Davis Dingus finishing a rebound after the initial shot came from Senior Ryan Mondragon who recieved a beautiful pass from Junior Jayden Agner, the Lions fell apart with a rare mistake from Junior goalie Sam Wenger. Wenger mishit the ball on a clearing and the ball ricocheted into the goal, off of the Hawks forward.

The Lions would force OT, but another mistake occured, leading to the game-winning goal being scored on Wenger and ending the Lions 2022 season. Their record officially ended at 5-12-1.

Mondragon wants to see the team do well in the coming years and knows that the Lions can do just that if they stick together as a team.

¨We were definitely overconfident when we entered the season, but there were moments when the confidence helped us win crucial games such as on Senior Day or even fight to the very end against Sparta [the Spartans] or Hudson Catholic [the Hawks],¨ said Mondragon. ¨The team needs to learn the difference between playing high school soccer and club soccer which will come in time since it´s a young team. They have great potential, and I hope this team will start it´s successful seasons next year.¨

Lions Head Coach Christian Ardila was pleased with the season, even though not much success came out of it. He saw players grow and become a family with one another by the end of the season.

¨It was a tough season, we were trying to replace 7 starters which was a really big task, and bringing in a lot of new players to the program made it a challenging season,¨ said Coach Ardila. ¨Early on, the team struggled to find leaders that were found as the season neared its ending point. We look to rebound next season to put a stronger team out there, and we can do that by taking what the Seniors have taught the next man up how to lead.¨