Phalon’s File: Dogs have Time on Their Side 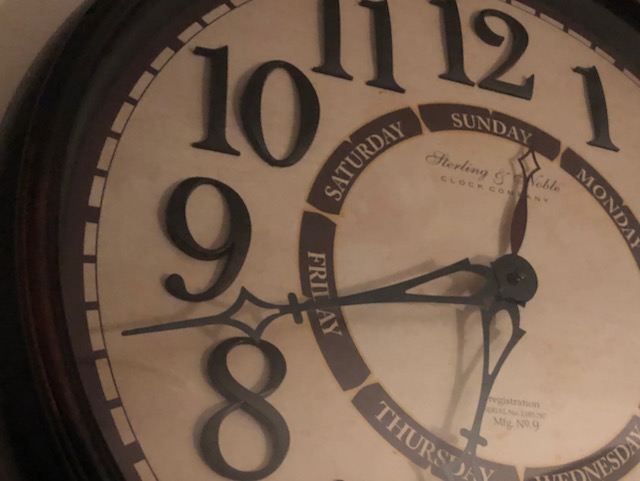 Dogs don’t care about this whole Daylight-Saving Time thing. I would imagine cats don’t as well. Cows and pigs, too.

And I am becoming increasingly indifferent to the whole thing. So, if I had some sort of appointment with you this week and I am an hour late or early, my apologies.

My disinterest in the twice-yearly changing of the clocks might have to do with the fact that I am not as tethered to time as I have been in the past, being mostly retired. My life revolves less and less around train and plane schedules.

There was a time, though, when I was one of those people who set my watch or any other device that told time to the second.

Simply moving the hands of a clock to reflect the time change was not enough for me. The
second hand had to be in precise harmony with the National Institute of Standards and
Technology clock, which governs all important timekeeping. Even clocks without a second hand had to accurately reflect the seconds with the minute hand’s position.

But now that I have some time on my own hands, I am looking at time more the way my dogs do. To them, suppertime is suppertime. It will be the same time today as it will be tomorrow. In other words, when their inner canine clock tells them “Suppertime!”

They don’t care if the clocks moved ahead. And suddenly neither do I, which has me now
joining the debate about DST. The discussion usually begins a day or two before the springtime change (even if it still is winter) and continues until most people have adjusted and get over it.

Each year, however, the debate does get more intense and is headed for a tipping point. The question: Should we have Daylight Saving Time all year and dispense with the clock-changing exercise?

Many of the myths about DST have been debunked. It doesn’t save a significant amount of
energy, says the U.S. Department of Energy. It wasn’t instituted at the request of farmers (I have a dairy farmer in the family and like dogs, cows don’t reset their clocks).

Just remember, though, that the extra hour isn’t just conjured up. It’s taken from the morning.

For most of the year, losing an hour in the morning is not such a big deal. Even with DST it’s usually daylight by 6 a.m.

Shifting that hour means additional darkness on winter mornings. For a few weeks in December and January it would still be dark at 8 a.m. I remember starting school in the dark during the energy “crisis” of 1973-74, when President Nixon extended Daylight Saving Time all year.

Most people hated the morning darkness and by the next winter, DST and Nixon were history. Gotta Go. It’s suppertime for the dogs.