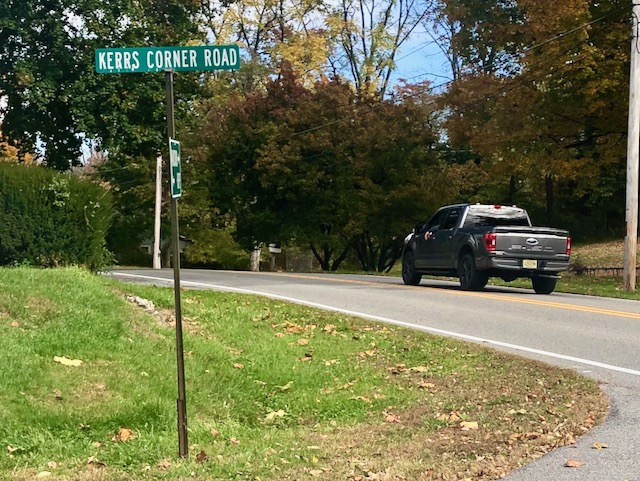 In case you missed them, those are stop signs on Kerrs Corner Road, where it crosses Silver Lake Road, and town officials hope to make them harder to miss.

After neighbors of the intersection expressed concern about the number of accidents at the
intersection, which seem to involve a high number of people unfamiliar with the location,

Larger stop signs will be installed as well as other improvements. “I want to see what we can implement it quickly and cost effectively,” said Frelinghuysen Mayor Keith Ramos at the Township Committee’s October workshop meeting.

While Silver Lake Road is a County Road, Kerrs Corner is a municipal road, which gives the
Township latitude to make changes without a high degree of bureaucracy.

The new signs would be placed on the left and right sides of Kerr’s Corner in both directions, and they would also be equipped with red reflective strips on the signposts.

Ramos said he was concerned that the reflectivity of the existing signs was insufficient.
In addition, brighter and bolder striping would be installed for the stop line at the signs, and several “stop ahead” signs on the approach to both sides would be replaced with larger, more reflective signs.

“That could have a fairly quick impact on that intersection,” Ramos said.

Beyond those immediate steps, Ramos said the Township will examine other possibilities such as rumble strips and a looking at sight distances around trees and berms near the intersection.

These changes in some cases would involve the County Road Department as well as utilities, Ramos pointed out.