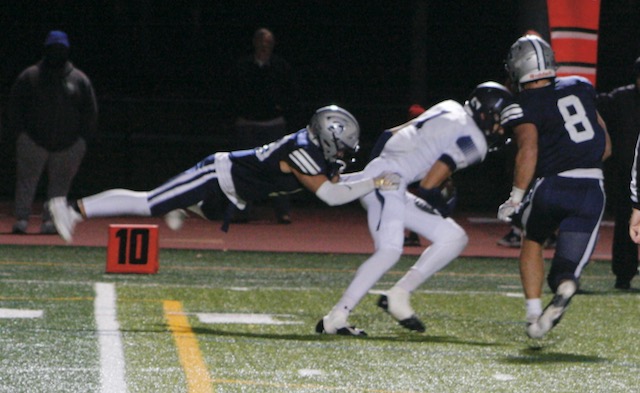 The Blair Academy Buccaneers finished their season on a four-game winning streak, with their 34-0 defeat of the Peddie School Oct. 29.

The road win comes on the heels of their 46-7 drubbing the previous week of Wyoming
Seminary. After winning their home opener against Kiski 9-6, the Bucs struggled for four games culminating in a 48-7 defeat by the Hun School, an admittedly high bar for Blair, said Head Coach Greg Bowman.

“They knew Hun would be tough, but they never stopped for a minute,” Bowman said after the game against Hun.

Their tenacity paid off, as the Bucs came back to beat Capital Prep Harbor School 39-2 the
following week, as well as coming out on top of the next three games to close out the season.

Bowman said the team made no major adjustments during the season, rather, they learned to better execute what they planned.

“We haven’t changed anything. We’re just working hard,” he said after the Wyoming win. “The kids are working hard every week and we’re executing, and our confidence is building.” Blair will be losing 11 seniors to graduation, Bowman said, but he is confident the juniors and sophomores will be ready for leadership roles.

“It’s those are the challenges every football program goes through every year.” Bowman said. “The next group has to step up and get ready to go. It’s always hard to replace that leadership experience but the young guys will step up and we’ll keep working and grinding away.”