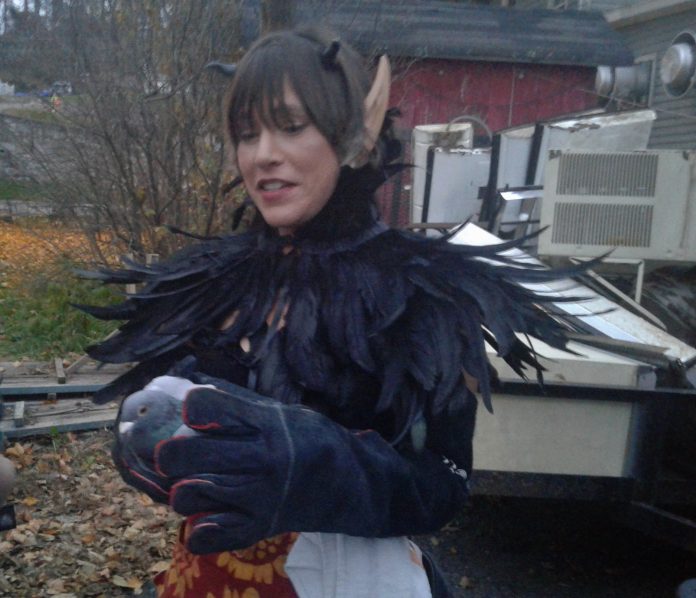 The Halloween celebration was quite a spectacular event this year. The cheerful community paraded downtown on October 31st in an array of creative costumes and pageantry, escorted by the big red fire engine of Blairstown Hose Company No. 1 to its final destination at the costume judging contest at the Agway.

During the festivities, an exotic gray pigeon was noticed on the windshield of a car parked behind Gourmet Gallery. The bird was pecking at berries and wasn’t even startled by costumed passersby. The pigeon’s iridescent green head and beautiful black stripes fit right in with the costumed gayety of the occasion.

When the owners of the bird’s new roost returned to the vehicle, they were amazed that it did not fly away and just stared at them through the windshield. They started the car and turned on the wiper. It just slid off and stayed on the car with what appeared to be a confused look.

Could it have crashed into the windshield and broken its wing? Could it be one of Alfred Hitchcock’s disgruntled birds looking for revenge? Could it be a homing pigeon looking for a place to nest? Might its name be Waldo? Could it be a stoolie? These were some of the questions asked by some in the crowd that was forming. The tired trick or treaters were flabbergasted.

After a few attempts to coax the bird off the car, someone ran for help. Luckily, Monica Zimmerman, an employee at the Gourmet Gallery and dressed as an adorable elf for the occasion, sprang into action. “I have bird gloves in my car!” Zimmerman exclaimed.

She soon sported padded gloves that ran all the way up her arm like a falconer. (See Ridge View Echo 9/26, Issue 17 story “INTERESTING FOLKS: Blairstown’s Monica Zimmerman Turns her Home into Welcoming Animal House” for more details about Zimmerman)

As she approached the pigeon, he dove under the car and tried to hide behind the muffler, but he was quickly scooped up into Zimmerman’s gloves. Everyone cooed with delight as she calmed the creature, stroking its head. She held the pigeon securely while Blairstonians, ghosts and goblins, pet this new feathered visitor to town.

It goes to show, birds of a feather do flock together.