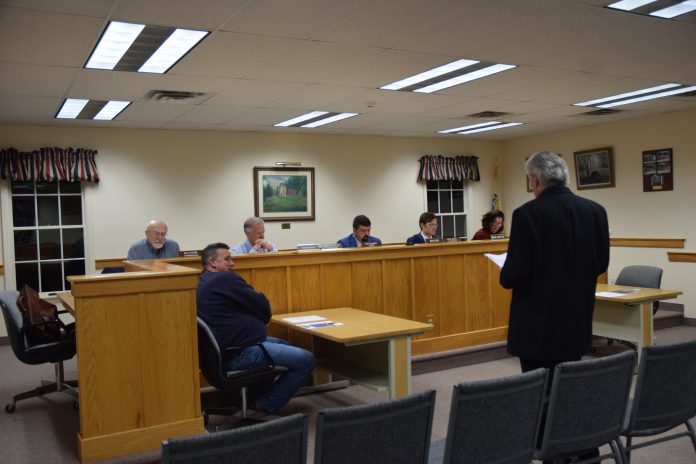 John Aaron Stark, a spokesperson for the Delaware Water Gap Defense Fund spoke during the 1st Public Comment session of the Hardwick Township Committee meeting in September. He shared what he considers vital information that Hardwick residents should take under consideration as they learn more about the Delaware Gater National Park and Lenape Preserve proposal.

“The NPS does not have a position whatsoever on this proposal.  It is not our proposal, and we are not involved in it.  We are neutral and neither support nor endorse the plans put forth by Mr. Donahue and the Sierra Club. Any changes in name or designation of a National Park Service unit, like Delaware Water Gap National Recreation Area, would require an act of Congress. The NPS does not comment or take a position on congressional affairs, including future or pending acts of Congress, unless asked to testify before that body.”

How did this proposal germinate?

As published recently on-line by the POCONO RECORD, “The Pennsylvania Federation of Sportsmen and Conservationists published an article by Jonathan Wall advocating for the creation of the Delaware River National Park and Lenape Preserve.”

They deserve to be recognized for an open minded and civil approach to new ideas in conservation. In March they opposed the proposal based largely on the potential loss of huntable acres and some concerns about new infrastructure adding to safety zones. These are legitimate concerns expressed in a thoughtful manner by the group.

However, new infrastructure is more likely in a national recreation area than it is in a national park, that is managed by the most restrictive policies. It is even less likely in the national preserve portion that is defined by surrounding or being adjacent to similar national park but where consumptive uses, such as hunting, are allowed.

Becoming a National Park comes with many questions, many of which Stark outlined in a means to think critically and to call upon John Donahue, whom is a proponent for this action. Stark suggested he needs to be asked specific questions to uncover facts.

Some of these questions include asking Donahue what the Native Indigenous Lenape Tribe feels about this occurring in their ancestral homeland. According to Stark, Donahue indicated he has the support of the Lenape and has consulted with Chief Vincent Mann and Michelena of the Turtle Tribe as well as having full endorsement from the Oklahoma Tribal Counsel.

There are many uncertainties. Although the Federal government indicates it’s not their plan to create more expense for neighboring towns, hinder recreational activities, create negative environmental impacts, nor take over any privately owned properties. However, they are not explicitly saying how they will protect against these negative complications, thus Hardwick Township Committee members said they want to seriously take under consideration these issues and analyze data before proceeding with this proposition.

Donahue was invited to the October Hardwick Township meeting to present information in favor of the Delaware Water Gap Recreation area being designated as a National Park. and Lenape Preserve.

He detailed the rich history of the National Park system and its mission to allow access to all Americans to view the natural wonders. He was passionate about this project, encompassing both sides of the Delaware River, in both Pennsylvania and New Jersey.

Donahue is a retired National Park system employee who once served as Superintendent. He fondly recounted childhood memories of vacations to National Parks. He recalled what visiting these areas meant to him to have access to these natural surroundings, having grown up in New York City.

The proposed National Park would encompass nearly 10,000 acres of Pennsylvania and New Jersey land and would compose primarily of the river. There is speculation that more land would be purchased from what he termed “willing buyers”, to offset the loss of hunting grounds due to the designation of the Natural Park.

Donahue stated that many studies have been done to back the positive impact that this designation would have on the natural landscape of this area. These positive impacts would include the highest protections available for a natural area as well as a positive impact on the local economy.

As part of these protections, the removal of agricultural leases would be included.  Donahue stated that this would help to protect the waterway and soil from different chemicals used in commercial farming and ensure the protection of the future of this natural area for generations.

No increase in fees is expected. He stated that in his opinion, he did not believe First Energy company could upgrade while the area was designated as a National Park.

After hearing Donahue’s presentation, the Township Committee members were able to ask questions and comment. John Lovell, Deputy Mayor of Hardwick, commented “We are voting on something without a plan”. Lovell, said he could not vote in favor of this proposition.

Mayor Jacksic commented on the many reservations he had on voting in favor of this proposition as well. His biggest reservations regarded around the uncertainty of how already taxed emergency services were spread too thin as is and was concerned that this designation would create more strain on these services as well as negative impacts for residents and cited the dangers that surrounded an unprepared emergency service response. Mayor Jacksic stated that he will have to withhold his support for this proposition of the National Park designation and Lenape Preserve as it is currently written.