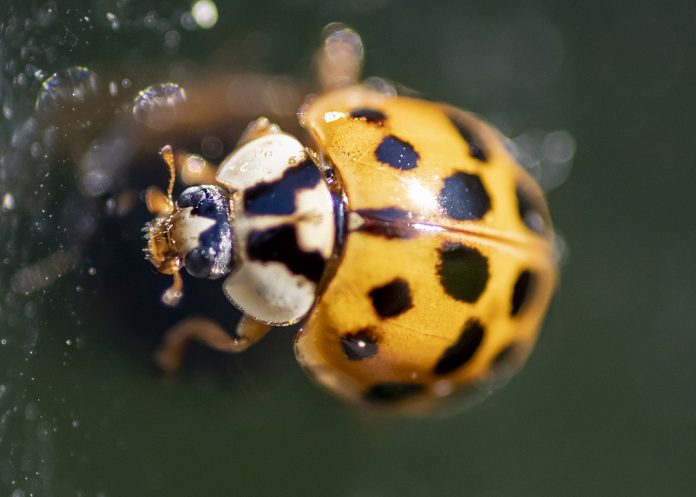 Throughout history ladybugs have often been associated with good luck. Who can’t remember being a child and marveling at a ladybug tenderly landing on your arm? There are ladybug posters, pillows, backpacks, stuffed animals and even movies! The vision of a ladybug on the petal of a flower could elicit a smile from even the most hardened cynic.

October ushers in a chill in the air. The leaves begin to turn, and the morning frost reintroduces itself. Yet it is still possible to get an unseasonably warm day, a gentle reminder of the last vestiges of summer.

That warmth brings with it the familiar tiny insect with the distinctive spots on its wings. They invade your home, barn, and garage. They are on your windows and on your walls. You may think, this is not the humble ladybug I gleefully remember from days gone by.

Well, you are right! In fact, it is not a ladybug at all. What you are seeing is a Multicolored Asian Lady Beetle.

The Multicolored Asian Lady Beetle (MALB) made its debut in our area in 1993-1994 when it was released by the U.S. Dept. of Agriculture as a biological control agent. Since then, it has been regarded by many as an annoyance in homes and in yards alike.

MALB’s are small, generally only 7mm long by 5mm wide. Their color ranges from red, orange, yellow and sometimes even black. They commonly have 19 spots but can also have no spots at all. They are easily identifiable by the “M” design on the top of their head.

Beginning around October 1 st , on a warm day that has been preceded by a cold night, MALB’s will gather on windows, in attics, and on walls of buildings by the hundreds, sometimes by the thousands.

They are searching for a warm place to spend the winter. They seem to be attracted to white or light-colored homes and buildings and show a particular interest in southward facing walls. This tendency follows their natural behavior of finding cracks and crevices in southward facing cliffs in their native Asia as they search for a place to overwinter. Once inside they tend to gather in corners of the walls, ceilings and in your windows.

Multicolored Asian Lady Beetles can bite if provoked, but they do not carry human diseases. If you crush them, they can emit a foul-smelling defensive chemical that can stain walls and fabric. However, they do not reproduce indoors and do not eat wood, fabric or even houseplants.

The MALB’s biggest threat is they are simply aggravating.

Multicolored Asian Lady Beetles may be a nuisance to some but unsung heroes to others. They eat aphids and other soft-bodied insects like Tic Tacs. According to scientists, MALB’s can eat almost 300 aphids a day. They are an important predator of soybean aphids. They protect ornamental trees, shrubs and crops while simultaneously reducing farmers reliance on insecticides.

As beneficial and harmless as they may be, how do you get them out of your house?

According to the Dept. of Entomology at Cornell University, “The use of insecticides for controlling MALB’s is not recommended and is strongly discouraged. The best technique for managing lady beetles is first to prevent their entry into houses and other buildings by sealing cracks and openings around windows, doors, siding, and utility pipes with a quality silicone or silicone-latex caulk.

If beetles still gain entry into living spaces, then it is recommended to remove and dispose of them using a broom and dustpan or vacuum cleaner and release them outdoors.”