Patriots Headed to the Playoffs After Thumping Pequannock, 33-6 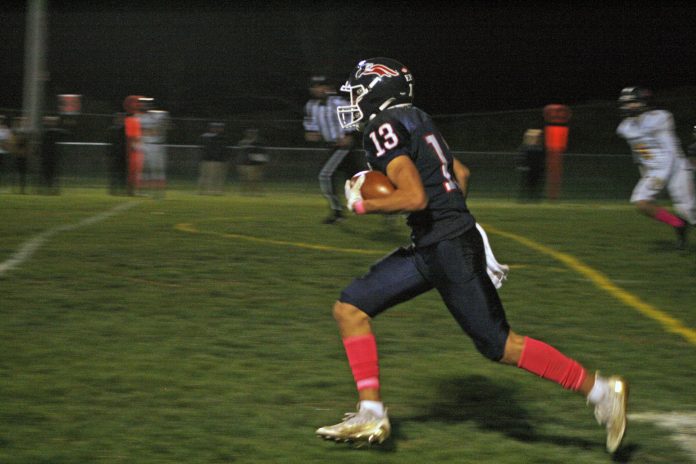 With their 33-6 thumping of Pequannock, the North Warren Patriots completed their first winning regular season since 2015 and are headed toward the postseason tournament.

“We haven’t been like this since 2015,” said Head Coach Eugene Furi. “It’s a nice feeling for the kids. They’ve been together since midgets. They’re a great bunch. They work really hard. I mean, I’m so proud of them.”

North Warren will carry a six-game winning streak into the first round as they travel to Butler this Friday to play the Bulldogs.

The Pats have been tightening up their loose ends as the season progresses, keeping mental mistakes and penalties to a minimum and taking advantage of opponents’ miscues. In fact, in their win against Pequannock Oct. 21, they put 14 points on the board before the offense even touched the ball.

“We got lucky,” Furi said. “Pequannock is a very good football team, and they had some turnovers we were able to capitalize on.”

On Pequannock’s first possession, Patriot Zachary Williamson snagged an interception in the end zone and ran it back 102 yards for a touchdown. North Warren kicked off for the second time, and on the first play from scrimmage Patriot Alex Diaz recovered a Pequannock fumble in the end zone for six, resulting in a Pats lead of 14-0 barely four minutes into the game.

The game settled down with no scoring until late in the third quarter then Diaz scored again from the 1-yard line followed by two Angelo Furi touchdowns, one on a five-yard pass from quarterback Jared Van Valkenburg and the second on a 35-yard run.