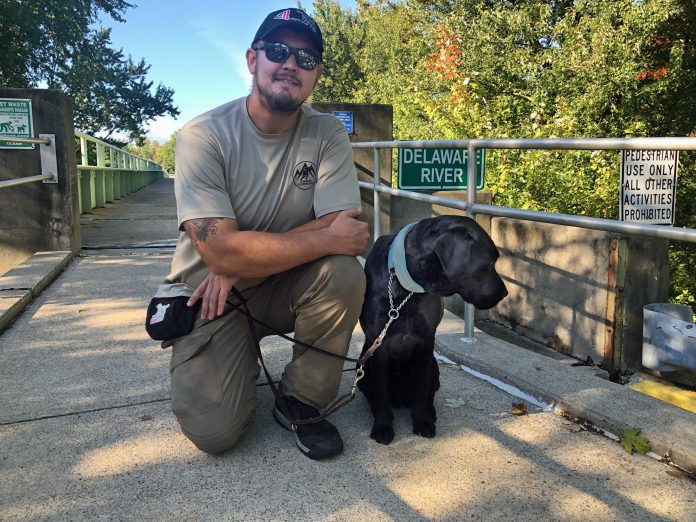 U.S. Army veteran Kevin Wilson’s journey to walk every mile of the National 9/11 Memorial Trail brought him through Knowlton, Blairstown and Hardwick in October.

The 9/11 Trail overlays the Paulinskill Trail through Warren County. Once he completes his journey on the route, which links the World Trade Center, the Pentagon and Shanksville, Pennsylvania, he will be the first person to have walked its entire length. And his companion and service dog, Calvin, will be the first canine.

Wilson, a veteran of six years with two tours in Iraq, arrived in New Jersey the morning of Oct. 6 after crossing the Portland-Columbia Footbridge, where he was greeted by several dozen local residents and members of veterans’ groups.

“I’ve met some of the best people along the way,” Wilson said. “I’ve formed a lot of connections with people.”

His journey began Aug. 24 in Washington, at the Pentagon, where he arrived from his Arizona home. Much of his effort has been supported by Warriors Expeditions, which provides with supplies for post-military, outdoor journeys. Wilson joined the organization after his medical discharge from the Army.

During his last tour in Iraq, he sustained an injury that damaged his vision. He has no peripheral vision and can only see straight ahead. That’s where Calvin comes in. He was trained by America’s VetDogs, an organization that provides service dogs for veterans with disabilities, including visual and physical. Some of the dogs are also trained to aid vets with post-traumatic stress disorder.

Wilson and Calvin reached the World Trade Center on Oct. 15. From there it’s back to Washington, where he expects to reach the Pentagon by about Nov. 15. That would give him enough time to get back home to his wife, who is pregnant with their second child and is due around the second week of December.

In addition to spreading awareness of the 9/11 Trial, Wilson is also hoping to raise funds for Warrior Expeditions.

“They have believed in me and looked past my disabilities to give me not just one chance but two thus far,” Wilson said. “Back in 2016 they offered me the chance to be one of the first groups going down the Mississippi River from Lake Itasca all the way to the Gulf of Mexico, paddling 2,340 miles.”

Wilson doesn’t accept money along the trail. Instead, he urges people to go to his Facebook page, Calvin’s Chronicle, where information about donations can be found. You can also trace his journey.