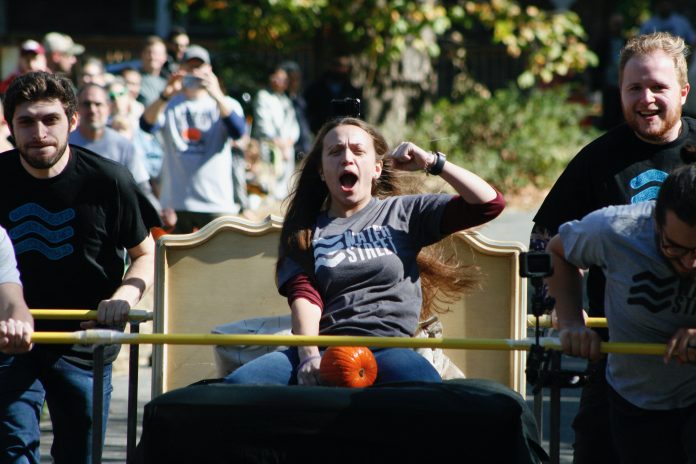 The beds were rockin’ and the people came knockin’ at the Bedlam in Blairstown races earlier this month.

During the first Township Fall Festival in several years unencumbered by pandemics, bad weather, fire and brimstone, earthquakes and any possible bad vibe, the second year of the revived bed races—once a Blairstown tradition—were run without a hitch before a crowd of several hundred in Footbridge Park.

Reigning champions Sleeping With the Fishes, who took the crown last year as Breakfast in Bed, retained their title despite the scorching competition.

The Fall Festival was organized by the Blairstown Enhancement Committee, a volunteer organization that works improve the community.

More than 40 vendors filled the Vendor Village, and numerous food trucks filled the appetites of the attendees. But the big event was the Bed Race, and they did not disappoint.

Returning from Bloomfield was the Aiello family, with their racing bed dubbed “Breaking Bed.” Fan favorites, the Holy Rollers, led by Matt Keller, described themselves as “resurrected” to race again.

The Incredible BEC (Blairstown Enhancement Committee) bed team was captained by Mr. and Mrs. Incredible themselves.

In between the two heats of the race, the parade division took to the track, with beds and teams fielded by Jingle on Main, the opening of the holiday season event; IMJM Siddhachala Jain Mission, which offered chia tea to everyone; Namaste in Bed, led by Cheryl Paulsen, promoting the Blairstown Recreation Program’s yoga class; Little Big Farm’s Enchanted Garden Bed, led by Patti Doell; and the Blairstown Rotary Club, which offers scholarships and who will soon be renovating the Givens Belet Hall for use as the future Blairstown Community Center.