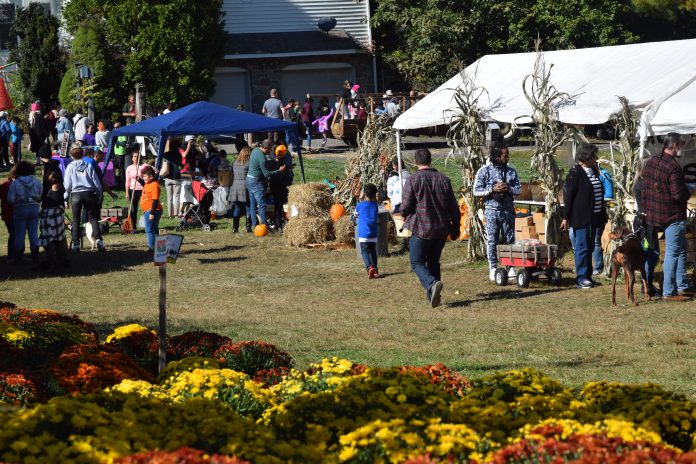 Longmeadow Farm’s 9th Harvest Fest was delayed due to rain, but beautiful, sunny skies on Sunday, October 9, brought hundreds to the Farm off Route 521. Perhaps because of their proximity to Route 80 and/or because of some savvy and wide-ranging marketing, many attendees came out from urban areas to enjoy an idyllic day on a country farm.

Owner Bradly Burke discussed the farm operation and what is grown. Longmeadow started growing pumpkins for Halloween in 1993. Shortly after, Burke expanded his growing operation and set to work with breaking ground and planting the first apple trees of his orchards.  By 1998, there were some apples available for harvest.

Longmeadow primarily sells apples direct to a small number of select retailers. Today there are 15 varieties of apples. Longmeadow Farm is open Saturdays and Sundays from 9am-5pm. The season runs from early September till the end of October for apple picking.

To some locals, Longmeadow Farm is known as the Raspberry Farm with healthy Raspberry patches but their 70 acres also grows pumpkins and other mixed vegetables including sweet corn, tomatoes and more.

Burke follows an Integrative Pest management approach to growing. He takes advantage of a Rutgers’ program that brings out students weekly to assess the farm, look at the fields and see what is currently affecting production.  They will make suggestions on when the best time to spray with any type of chemical input, so that it is most effective as well as a way to limit use and use the least amount of spray.

He has now shifted away from what is considered the harder chemicals to newer chemicals, which have less residual impact on the environment as well as introduced more use of sprays that are considered organic certified sprays (OMRI).   He chooses to use many OMRI certified organic pesticides.  The farm uses composting as a way to help nourish and enrich the crops naturally to eliminate the need of chemical fertilizers.

Longmeadow Farms takes part in a gleaning program through Local Share as well as Grow a Row. Gleaning is when unpicked produce like apples are gathered by volunteers twice weekly.  By doing this, food waste is limited.

Grow a Row is a program that specifically sets aside a portion of a farmer’s crops to be donated directly to help feed those that are food insecure. The produce from both programs is gathered and shared with different food pantries.

The night before the Festival, Longmeadow Farm faced a frost which caused Burke to lose all his vegetables. Frost is an environmental situation that faces farmers and creates another level of adversity.  If a ‘hard frost’ (defined as a period of more than four hours when temps drop below 28 degrees Fahrenheit) occurs in Spring when the apple blossoms have already bloomed, Burke mentioned that this could greatly affect the apple season.

Despite the previous night’s adversity, Longmeadow’s Harvest Festival was filled with happy people, sunny weather, beautiful music, delicious food, and creative local vendors. Hayrides were available for those attending to get a great view of the farm.