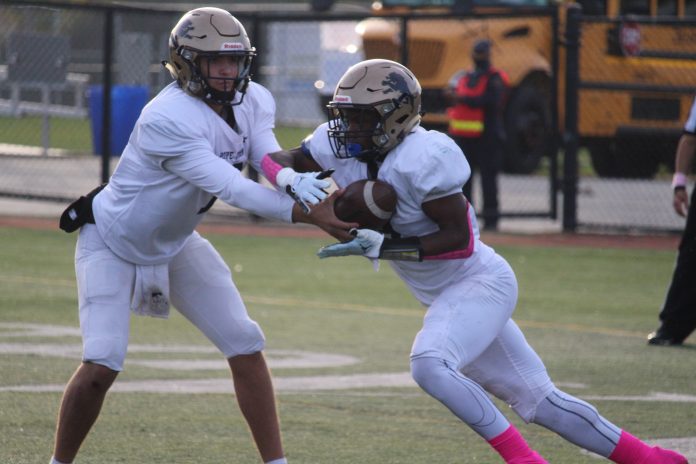 The Pope John Lions football team was full on energy entering their Homecoming game against the Immaculata Spartans on October 1st. To honor the beginning of Breast Cancer Awareness Month, Pope John´s student section wore pink for the game. After a game that was controlled entirely by the Lions, the game ended with the Lions winning 48-7.

The Lions got off to a 6-0 lead with a Sophomore Tylik Hill 21-yd TD run. After Junior Jack Morgese´s extra point kick was blocked, the Lions took a 6-0 lead into the 2nd quarter. The Lions´ defense held strong, and the offense scored twice more before the Spartans were able to put points on the board. The Lions led 20-7 at halftime. Junior cornerback Chaas McCoy was very proud of how the defense was doing after allowing over 30 points in both of their previous games.

¨Great job from everyone today, we went out and got the job done,¨ said McCoy. ¨We can´t relax, take our foot off the gas because we have good momentum right now.¨

The halftime show wasn´t just a cheerleading performance from the Lions´ cheer squad, but the announcement of the Homecoming King and Queen. As announced at the Homecoming Dance 2 days earlier, the King was Senior football captain Sean Line. The Queen was Senior cheerleader Kylie O´Malley.

¨It´s an honor, I was very surprised, but I´m very happy and honored to be Homecoming Queen,¨ said O´Malley. ¨Our football team is amazing, I´m so proud of what they´ve already accomplished this season, and they are an amazing family to be a part of.¨

Line also was very proud of how the team played in the 1st half and wanted to see them play like that in the 2nd half plus in games moving forward.

¨It´s cool to be this year´s Homecoming King, the football team was a big supporter of me being voted King, so it was nice to see how much they see me as a good person off the field as well as on the field,¨ said Line. ¨Today´s game went great for us. Our energy was high, we can out firing from the start, and everything seemed to be clicking.¨

The 3rd quarter was all Lions. The Spartans kept making mistakes that led to Lions´ touchdowns. Hill ran for 2 more touchdowns while Line intercepted the ball, running it back to for a touchdown.

Finally, after McCoy intercepted the ball and scored a touchdown on the same play, Lions Head Coach Dom Gaston took out his starters and put in the Freshmen team for the 4th quarter. Coach Gaston was very proud of his team, but knew the games would only get harder.

¨It was a much needed win after the bye week,¨ said Coach Gaston. ¨We got players back from injury with more coming back next week, so getting a dominating win after a week off is great for us. I´m, especially, proud of how all 5 of the Seniors are leading this team. They work together to motivate everyone to do their jobs on the field. Sean [Line] had a great game today, but each one has those games which can sometimes go unnoticed by many people.¨

The Lions look to continue the success that they had been having. With a 4-1 record after 6 weeks, the Lions know the road to the playoffs isn´t easy, but if they work together, they will have success, on and off the field.

¨Our defense is where I think our strong point is,¨ said Coach Gaston. ¨They have all come together to make necessary stops and be the cornerstone for our team. It hasn´t been easy for them after allowing 30 plus points in 2 of our 5 games this season… They worked as a team to shut down Immaculata´s offense.¨