Spartans Get Best Of Boys Soccer Lions in 2022 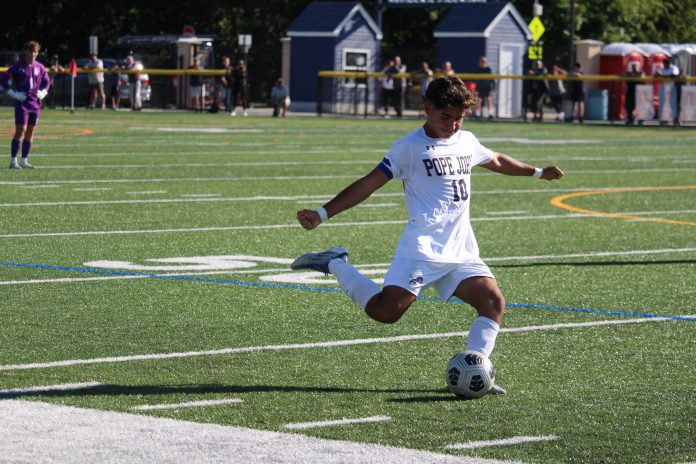 The Lions didn’t come out in the 1st half with the intensity that their head coach, Coach
Christian Ardila, wanted them to. With the team continuing to be a losing streak, Coach Ardila wanted to see the team play a near perfect game because of the amount of emotion that the game would bring.

“When it comes to playing a cross-town rival, you have to play a game where it’s close to
perfection,” said Coach Ardila. “We had 2 mistakes, and those mistakes turned into goals in their favor. We had a tough time recovering from our mistakes, but we found the back of the net once with many other scoring chances as well. They had more effectiveness than us, and that was the difference of the game.”

The Spartans jumped on the scoreboard first with Spartan Junior Owen Carey’s 1st goal of the Season. With the Spartans leading 1-0, the Lions fell into a defensive mindset. Lions Junior goalie Sam Wenger knew that if the Lions couldn’t change the pace of the game, the game wouldn’t end the way the Lions wanted.

“If we keep getting frustrated with one another, we won’t be able to play our game,” said Wenger. “We can use our frustration for good by using it as a driving force to help us win
games.”

The 2nd half began with the Lions coming out with an offensive surge of pressure; however with Spartan Junior goalie Chris Munoz stopping all the Lions’ chances, Spartan Junior Quint Flannery was able to find the back of the net for his 2nd goal of the season.

Frustration started to set in for the Lions, but Wenger was able to keep the Spartans from scoring any more goals.

Late in the 2nd half, Junior forward Stevan Patino found the back of the net for the Lions, shortening the Spartans lead to 2-1. This goal came too little, too late as the Lions ran out of time to tie up the game. The final burst of scoring chances from the Lions was very promising to the team, but they still felt the sting of losing to their cross-town rivals, twice.