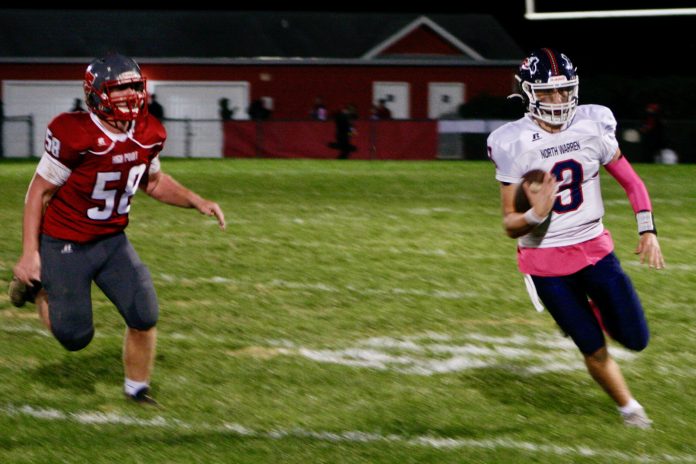 Angelo Fluri escapes the grasp of the Boonton Bombers.

The Patriots of North Warren marked their second last-minute victory of the season over Boonton on Sept. 30, bringing them to a 3-2 record.

The 26-21 North Warren win came after a touchdown by each team to start the contest that you would missed if you were having trouble getting into a parking space. After a 35-yard run by Boonton to score just over a minute into the game, North Warren answered less than a minute later with a 35-yard touchdown pass from Jared Van Valkenburg to Craig Shipps.

North Warren opened up a 20-7 lead and held onto it deep into the fourth quarter when Boonton climbed back to take a 21-20 lead with four minutes to go.

The turning point came earlier in the fourth quarter. Leading 20-14, the Patriots were poised to score six from four yards out when running back Alex Diaz fumbled in the end zone. The Bombers converted that miscue into a touchdown and extra point for a one-point lead.

On their next possession, Diaz, who had 111 yards on 22 carries for the night, caught a 35-yard touchdown pass from Van Valkenburg to regain the lead with 48 seconds.

“You know, we, we talked about it all week,” head coach Gene Fluri said after the game. “Hey guys, it’s going to be a true test. You have to be disciplined because they’re very disciplined.”

After the Diaz fumble, Fluri said he told his team to move on, it was in the past.

“So the kids came back,” he said, with Diaz demonstrating just how quickly they can recover.