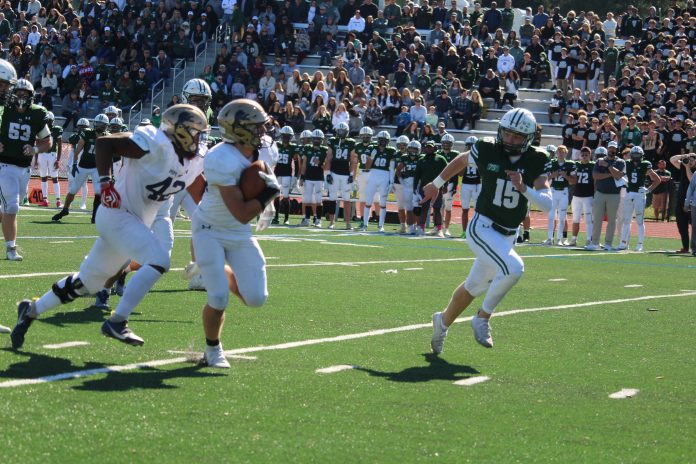 The Pope John Lions football team has had an amazing start to their 2022 season. With a 4-1 record, and being on a 3-game winning streak, the Lions looked to take down the Delbarton Green Wave last Saturday. The Green Wave, behind their enormous student section, defeated the Lions 37-19 in their Homecoming game.

The Green Wave began the 1st quarter in control of the game. With Green Wave Senior
quarterback Robert Russo giving the Green Wave a 7-0 lead on a 2-yd run, the Green Wave tried to take the momentum of the game, but the Lions wouldn´t go down easily.
Junior quarterback Chris Dietrich put up a great ball for Junior wide receiver Zac Cusick, who caught it for the tying touchdown. On the next drive, Dietrich found Sophomore Joey Rozynski for another touchdown. With the Lions leading 12-7, Rozynski and the Lions felt good to be back into the game.

¨Our offense has come a long way since the beginning of the season, and to be part of that
transition is really cool,¨ said Rozynski. ¨My TD catch felt amazing, but all the credit goes to Chris [Dietrich] for giving me a chance to catch the ball, putting it right in the spot where I wanted it. ¨

The Green Wave, however, wouldn´t fall easily either. With the clock winding down, and after a touchdown that gave the Green Wave the lead earlier in the quarter, Green Wave Senior kicker Jack Peros extended the lead to 17-12, heading into halftime. With the Lions down, Head Coach Dom Gaston wanted to regain the lead right out of the half.

The Lions did just that. Dietrich found Sophomore Tylik Hill in the endzone to take back the
lead, 19-17. The lead wouldn´t last long because of the mistakes that began to take over the Lions on offense. A blocked punt, a fumble, and 2 interceptions led to the Green Wave scoring 3 touchdowns.

¨Starting the 3rd quarter with a touchdown was the exact way we wanted to come out of the half, ¨ said Coach Gaston. ¨We´re a team that is very good on special teams, but today was a tough day for our special teams which I think we´ll come back next week and be just fine with. ¨

The Lions wouldn´t recover, and the Green Wave won 37-19. Coach Gaston knew that the team hadn´t played their best but was focused on how the Lions were coming together as a team, win or loss.

¨We struggled today on picking each other up and acting as a family because we were losing,¨ said Coach Gaston. ¨That isn´t how Pope John football exemplifies itself during games, but I know this team will come to practice on Monday with a different attitude because it´s a youth maturity thing that everyone struggles with, and because our team is a family that can´t be broken by games like this.¨

The Lions looked to rebound in next week´s matchup against the Depaul Catholic Spartans at home. With a 4-2 record, the team is still playing much better than in past years and looks to continue the success of the overall season.