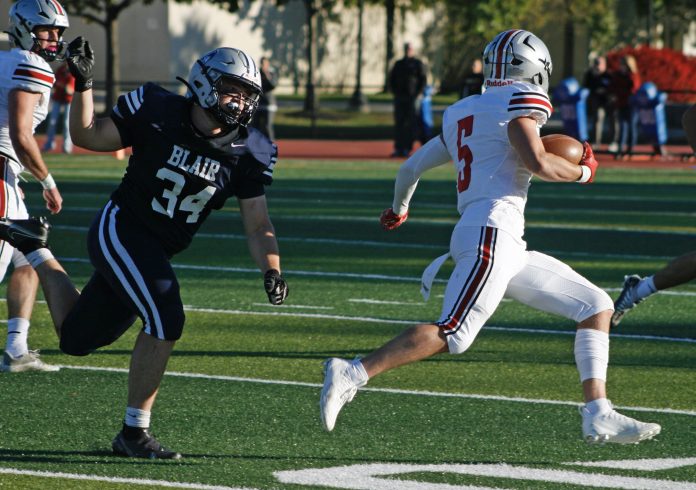 Buccaneer Head Coach Greg Bowman knew his team was going up against one of the best football programs in the league, and the Raiders of the Hun School of Princeton lived up to their reputation, beating Blair Academy 48-7.

But Bowman came away proud of his players.

“This is a tough one, but our guys never gave up,” Bowman said. “Hun is a very, very good football team. They’re talented. We knew that. But, you know, we challenged our guys and our guys wanted to play a team of this caliber and we knew whatever happened, we were going to play every single snap as hard as we possibly could. And I’m proud of our guys. So I feel like we did that.”

Despite the lopsided score, the Bucs played a tight and disciplined game, committing only two turnovers, both interceptions, which they answered by recovering two Hun fumbles.

One of those fumbles, right at the goal line, was recovered by Buccaneer Babawale Fadeyibi and led to Blair’s lone touchdown.

“We were able to get a couple turnovers, and we got on the board with a with a defensive score, which is always awesome,” Bowman said. “Our guys were just fighting and scrapping the whole time, trying to make plays, and that’s all any coach can ask doe. Guys who are fighting to the end and trying to make plays. I think we did that today.”