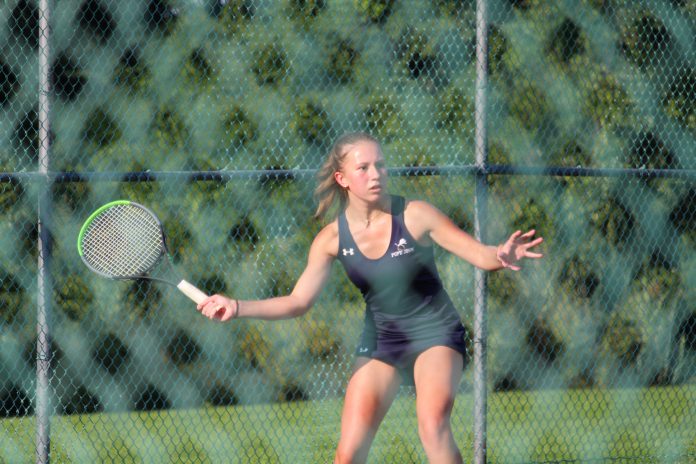 The Pope John Lions girls’ tennis team was coming off a strong win against the Roxbury Gaels the day of the match against the West Morris Central Wolfpack. It was less than 24 hours since the Lions had played the Gaels and another match would take place the next day for the Lions. With that in mind, the Lions stepped up and came to play in a resounding 4-1 victory against the Wolfpack.

The Lions got off to a tough start as Junior Lily Petersen lost to Wolpack Junior Cassidy White in the 2nd Singles match. Petersen fought hard, but couldn´t find a way to beat White. With the Lions down 0-1, Junior Anika Rodriguez had to set up big and win her match in the 3rd Singles match.

Rodriguez played a close 1st set with Wolfpack Sophomore Lauren Zito, winning 6-4. With
Rodriguez tiring Zito down with a strong 1st set, Zito couldn´t keep up with Rodriguez´s pace during the 2nd set. Rodriguez won 6-1, winning the match against Zito, evening up the match between the Lions and Wolfpack at 1.

Ashworth was very pleased with her performance with Tobey and to see Williams and Stock
win their match to help the team win the match. ¨It feels really satisfying to win, especially when you play a good match,¨ said Ashworth. ¨We played a great match against the Wolfpack and are playing really well this season. ¨

With the Lions leading 3-1, Freshman Julia Tarkowska´s match in the 1st Singles match against Wolpack Sophomore Lia Nowak didn´t matter if the Lions would won or not, but to Tarkowska, any match is another challenge to improve and show everyone what she can do.

¨What I´ve learned from the Juniors and Seniors on Pope John´s team is that every match is a new challenge, whether or not the match will be the reason that your team wins or loses,¨ said Tarkowska. ¨The Juniors and Seniors have taught me many other things as well. They teach me to be inclusive in anything I do and make me feel part of the team.¨

Tarkowska played very well and had to fight to a 7-6 (7-2) 1st set win over Nowak. With the 1st set win under her belt, Tarkowska settled into her rhythm and found the extra effort to defeat Nowak 6-3, ending the Lions´ match against the Wolfpack in 4-1 victory. Tarkowska was very pleased with the win in her match and felt proud to have fought for the win in the 1st set.

¨My match against West Morris Central was a tough match,¨ said Tarkowska. ¨My opponent was good, but I was able to place my shots in ways that it made returns very challenging for anyone to return. I am very happy to be doing this well this season, winning nearly all of my matches. ¨

With a match the next day, the Lions wouldn´t have much time to dwell on their wins against the Gaels and Wolfpack. The win against the Wolfpack improved the Lions´ record to 2-1 and Lions Head Coach Fred Van Keuren was very pleased with the girls´ performance to begin the 2022 season. Coach Van Keuren hopes that the girls can keep up the pace they are setting with more wins and hard-fought matches.