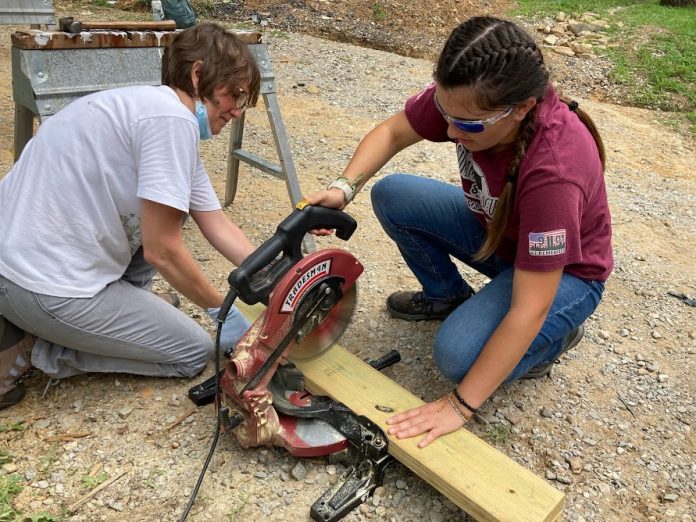 Nestled in the mountains of southeast Kentucky sits the unincorporated community known as Red Bird and the Christian organization Red Bird Mission.

Created more than 100 years ago, Red Bird Mission addresses the issues of poverty, poor housing, and lack of jobs that persist in their region of the Appalachian Mountains. Every year the Red Bird Mission invites members of churches all over the country to aid in their community outreach.

In 2017, the First United Methodist Church (FUMCB) decided to join the cause.

FUMCB’s pastor David Tillish explained the work accomplished over the course of the week. “So those people [who attended] this year replaced a roof, installed three handicap ramps and decks, put down laminate flooring, and installed a handicap accessible shower.”

When missionaries travel to Kentucky they have no idea what kind of projects they’ll be tackling— so these rookies must learn on the job. “What I think is really cool about this ministry is people go down there not necessarily knowing how to use the tools that we’re going to give them. But, they learn,” stated Tillish.

He continued, “We had people who never really used to drill before, and suddenly they’re screwing in decking, you know, like, they’re pros.”

If projects take longer than a week, no worries. Red Bird Mission invites and rotates volunteer groups 11 months out of the year. When the group including FUMCB volunteers left, another bus was arriving with more helpers.

Red Bird Mission offers a wide variety of volunteer opportunities since its areas of service are so diverse. Missionaries can aid in clothing assistance, clean water initiatives, food pantries, senior citizen at-home care, education at all levels, and farming support. Tillish recalled, “There are people ages 14 to the oldest person I think I worked with was 85 on this trip. And there’s something for every person to do.”

Tillish tries to prepare his church’s group about the living conditions of those receiving Red Bird Mission’s aid.

“It’s an incredibly vulnerable position that these homeowners placed themselves in. Trusting that we’re going to respect their house, we’re not going to belittle them for needing help… And so I’ve shown [the volunteers] videos about Appalachia to help them to learn about the culture of poverty because that’s really what you’re talking about is a culture of poverty.”

Tillish believes it is a Christian principle to give to those in need without question or judgement.

Red Bird Mission is a religious organization and defines its outreach as a “ministry commissioned to propagate its faith or carry on humanitarian work.” Although Red Bird Mission’s work is done in the name of a higher power, those receiving the benefits don’t need to hold the same beliefs.

Red Bird Mission recently divulged a decline in support. The organization reported a “financial crisis that is making it difficult to continue all of the areas of ministry” and explained that without an uptick in donations the mission, “will have to reduce the level of ministry provided to this community.”

To join the First United Methodist Church of Blairstown’s group of volunteers for 2023 contact the church at info@firstumcblairstown.com. To donate directly to Red Bird Mission click here.