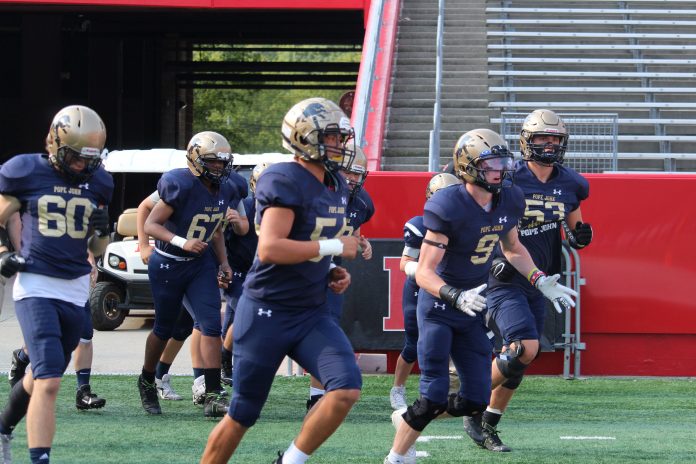 Over the last 2 weeks, the Pope John Lions football team has played only a single game, but it was one of the biggest games they will play all season. The Lions looked to take down the Cardinal Hayes’ Cardinals on the football field that the Rutgers Scarlet Knights played on. This wouldn’t be an easy task since the Cardinals were a very strong football program led by Sophomore quarterback Rich Belin. In the end, the Lions would leave SHI Stadium with a 40-36 victory.

The Lions got off to a rough start with their offense not connecting on passes and defense allowing big runs from Belin. With the Lions already down 6-0, the Cardinals decided to run an option that led to Belin running free down the sideline for a 44-yd rushing TD. After another punt from Lions Junior kicker Jack Morgese, the Cardinals began a drive from inside their own 20-yd line.

On 3rd down and with the Lions´ defensive line causing Belin to throw into heavy coverage, Lions Junior linebacker Sir Paris Jones intercepted the ball and ran it back 13 yards for a touchdown. After the 1st quarter, the Cardinals led 14-6, but the Lions regained momentum to get back into the game.

¨From being out for a year last year due to injury to running back a pick six in a big game, it felt good for me, but it also gave us the boost that we needed to say, hey, we can do this,¨ said Jones after the game.

With this in mind, the Lions jumped to a 19-14 lead after Junior Charlie Mulligan ran the ball into the endzone, and Sophomore Wes Johnston made a highlight reel catch for a touchdown. Morgese, having missed the 1st extra point try, made the 2nd, but missed the 3rd. With time winding down, the Cardinals answered with a touchdown and 2-point conversion, their 2nd of the game to give the Cardinals a 22-19 halftime lead. Lions Head Coach Dom Gaston was pleased with the comeback, but knew that the Cardinals wouldn´t fall easily.

¨Playing on a Sunday for us is very unusual, and it showed because we came out a little flat,¨ said Coach Gaston. ¨The Cardinals Hayes football program is a very good program. Coach [CJ] O´Neil has won many city championships, and we played very well considering who our opponent was. We´re a good team this year to compete with teams like that, so we just rallied back from a tough 1st quarter, and fought the rest of the way.¨

The Lions came out of the half looking like the 2nd quarter team. They moved the ball and scored 2 more touchdowns, expanding their lead to 32-22, but the Cardinals wouldn´t quit. They answered back with 2 touchdowns of their own, including another 54-yd rushing TD from Belin. With minutes left to play in the game, the Lions needed a player to step up. Sophomore Tylik Hill did just that.

¨It was a tough game, they are tough opponents, but we came out on top and it feels good to win at Rutgers after falling to Seton Hall Prep 2 weeks earlier,¨ said Hill. ¨I knew I had to step up big, I always know, that in any game, my time will come when I need to give the team an extra boost with a big run or something, but it still feels amazing to have something like that happen, and for it to be a big reason how we came out on top.¨

Coach Gaston was very pleased with the effort from the team to fight for their 3rd win of the season, heading into a well-deserved bye week.

¨It feels great to be 3-1 this season,¨ said Coach Gaston. ¨We are going into our bye week, a much needed bye week, so that we can get some players back from injury. It was a fight that we won, we have our homecoming game coming up on October 1st against Immaculata, so we need to look forward, and not let off the momentum that we are building.¨