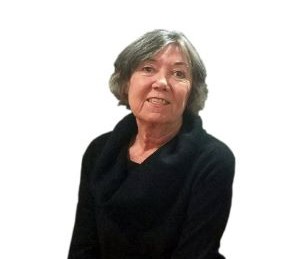 Bridget Lillian Keating died suddenly Aug. 31, 2022, in Allentown, PA. The cause of death was a brain aneurysm.

A business leader who was influential in advancing the careers of other women in business, she will be remembered for her sense of justice, loyalty, and unwavering support in defending the right causes. An organ donor, in death Bridget helped save the lives of at least three people.

Born on Long Island, NY, Bridget was the daughter of William Joseph Keating and Gloria Pflugfelder Keating. She grew up on Long Island and in Madison, NJ, where she graduated from Bayley Ellard High School. She received her bachelor’s degree in business administration from the University of New Hampshire.

Bridget lived and worked for much of her professional career in Manhattan. Later, she split her time between New York City and Shawnee on Delaware, PA, where she purchased and restored one of the lakefront cottages built by bandleader Fred Waring. She was an active volunteer with the Shawnee Preservation Society, Brodhead Watershed Association, and the Pocono Heritage Land Trust. She also provided free tax preparation services for seniors through the AARP and IRS.

Bridget was a financial services manager for BATUS, then owner of Saks Fifth Avenue, from 1979 to 1986. In 1987, she joined Astro Communications, Inc., as Controller, and later served as its Vice President and Chief Financial Officer from 1987 to 1995.

Among her duties at Astro was leadership of the National Association for Female Executives (NAFE), a membership organization and publisher of Executive Female magazine. Under Bridget’s leadership, NAFE’s membership grew from 150,000 to more than 230,000.

From 1995 to 1998, Bridget worked as an independent financial consultant for a variety of businesses in Manhattan, including Restivo’s, one of her favorite neighborhood restaurants. In 1998, she became Chief Financial Officer at Affinity Solutions, where she worked until 2013.

Active in supporting many causes related to women’s rights, Bridget embraced NAFE’s mission to help women advance in all fields of business and achieve financial independence. Since 2020, she worked as Controller at TCB Promotions in Shawnee, where she successfully led the organization’s efforts for certification from the Women’s Business Enterprise National Council as a Women Owned Small Business. At TCB, she supported the successful management of finances, and human resource communications, as well as public relations and media releases. From 2020, she led efforts resulting in a 40 percent increase in revenues. In 2021, TCB was named Business of the Year by the Pocono Mountains Chamber of Commerce.

Bridget inherited a strong sense of justice and personal responsibility from her parents that she acted on throughout her life. She treated everyone with the respect and integrity they deserved, including homeless neighbors in Manhattan to whom she provided food and money, and young professionals that she supported and mentored along the way. She was genuinely concerned for the wellbeing of others and had a way of giving people what others couldn’t.

Bridget was a lover of all animals, especially hound dogs, stray cats, and birds. She enjoyed gardening and plants of all kinds and was active in protecting and promoting native plants in the Pocono Mountains.

Bridget maintained strong friendships from childhood and her professional days and was always a supporter and advocate for her parents and siblings, opening her home as a place to live whenever needed and as a gathering place for family events.

A private memorial is planned.

In lieu of flowers, donations can be made in Bridget’s name to the Animal Welfare Society of Monroe (AWSOM), a no-kill animal shelter. https://www.awsomanimals.org