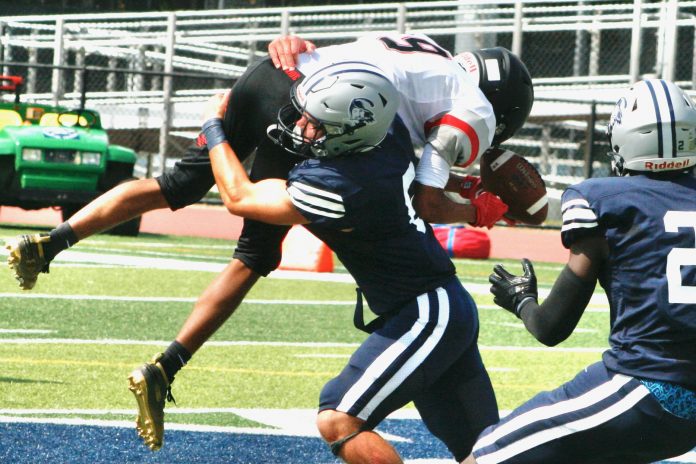 The Saturday morning round-robin was the lead-in to the Buccaneers’ first regular season game Friday, Sept. 6, against the Kiski School of Saltsburg, Pennsylvania, at 7 p.m.

Blair will then be on the road through Pennsylvania for the next three weeks, playing William Penn Charter School in Philadelphia on Sept. 17, Germantown Academy in Fort Washington on Sept. 24 and Episcopal Academy in Newtown Square Sept. 30.

The Buccaneers return to their home field Oct. 8 to face the Hun School of Princeton.

Playing in the Mid-Atlantic Prep League, the Bucs are led by Head Coach Greg Bowman, in his fourth year after having served as defensive coordinator.

Before his arrival at Blair, Bowman was the defensive back coach at Misericordia University for three seasons, where he was also worked with special teams. Bowman also coached for 12 years at Pleasant Valley High School in Brodheadsville, Pennsylvania, 11 defensive coordinator.

Blair has fielded a football team since 1884.