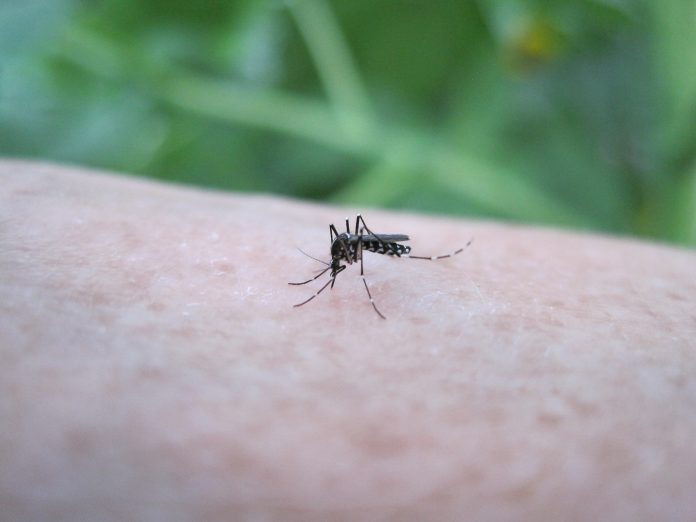 Three male residents tested positive earlier this month for West Nile virus, in Bergen, Morris, and Ocean counties. Two are in their 50s, one is in his 80s, and all were hospitalized.  Two individuals are recovering at home and one remains hospitalized. WNV has also been detected in 293 mosquito pools and a red-tailed hawk this year in New Jersey. No cases of WNV have been reported in horses in 2022. In a typical year, there are eight human WNV infections reported. Last year, New Jersey had 36 human cases of WNV. WNV activity is elevated in mosquitoes this year, but is similar to five-year average trends.

“August and September are the months that we see most West Nile virus cases in New Jersey,” said Health Commissioner Judith Persichilli. “It is important that residents take steps to protect themselves by using an EPA-registered insect repellent, wearing long sleeves and pants and avoiding the outdoors during dawn and dusk when mosquitoes are most active.”

For many people, the virus causes asymptomatic infection or a mild to moderate illness, typically with a fever. People over age 50 and people with weak immune systems are at greater risk of developing severe illness.  About one in 150 persons will develop a more severe form of the disease, with symptoms such as a severe headache, high fever, neck stiffness, stupor, disorientation, coma, tremors, convulsions, muscle weakness and paralysis.

Early symptoms of WNV may be confused with COVID-19 or several other common viral illnesses. Specific laboratory tests are needed to confirm WNV, but there is no specific treatment for it. The best way to prevent the disease is to avoid mosquito bites.

“Controlling New Jersey’s mosquito population is a major part of protecting our public health,” said New Jersey Environmental Protection Commissioner Shawn M. LaTourette. “While we have been seeing unusually dry weather this summer, people can help by removing any standing water in their yards and covering any empty containers that can hold water for more than three days. Even small amounts of rain following these drought-like conditions can produce significant numbers of container-inhabiting mosquitoes known to spread West Nile virus.”

In addition to potentially harming humans, WNV can harm certain animals as well. WNV affects a horse’s neurological system, which is why preventive care is encouraged.

“We strongly urge horse owners to vaccinate their animals from serious mosquito-borne illnesses such as West Nile virus and Eastern Equine Encephalitis,” said New Jersey Department of Agriculture (NJDA) Secretary Douglas H. Fisher.  “We have found that animals that are vaccinated are less likely to contract these deadly diseases.”

Residents, business owners and contractors are asked to take steps to reduce mosquito populations on their properties by emptying or changing outdoor standing water at least weekly to stop mosquito breeding. Areas that may need attention include flowerpots, pet food and water dishes, birdbaths, swimming pool covers, clogged rain gutters, plastic wading pools and wheelbarrows, and any containers or trash that may be difficult to see, such as under bushes, homes or around building exteriors. Contact with mosquitoes can also be reduced by using air-conditioning when possible and ensuring window screens are in good repair. Refer to tips for Mosquito-Proofing your Yard for more information. Residents are also encouraged to report mosquito concerns to their county mosquito control agency.

WNV is an arboviral disease which people can acquire through the bite of a mosquito that has fed on an infected bird. WNV is not directly transmitted from birds to humans.

Weekly reports on WNV-related activity are available on the Department’s website.

N.J. arboviral activity in mosquitoes is available at https://maps.vectorsurv.org/arbo