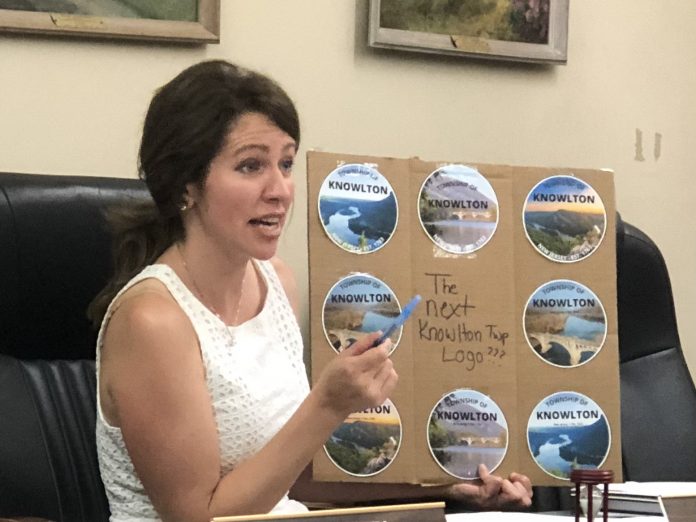 The good people of Knowlton may soon have a new logo to represent their hometown.

Many towns, cities, villages and podunks have logos—or symbols, crests, heralds, etc.—to signify their localities. They often are an interpretation of the town’s name or perhaps a local landmark. The municipality of Accident, Maryland, for instance, opted for the latter, and used a church steeple.

The logo proposed for Knowlton is a round image, featuring an aerial view of the Delaware Water Gap, in this case the landmark option. It’s a lovely image, that clearly communicates the natural beauty of the township. Several alternatives also included the river and mountains of Knowlton.

Mayor Adel Starrs showed the nominees at a recent Township Committee meeting and asked for a show of hands of those present to indicate which one should move forward. The aerial view was the overwhelming favorite of the group.

It was mine, too, but I didn’t vote because I was there as a journalist and we’re supposed to be unbiased, and also because I don’t live in Knowlton, so it was pretty much none of my business. I live in Blairstown, where the mill on Main Street serves as our visual reference.

A town logo is often included on municipal stationery, websites and vehicles such as DPW trucks and police cars.

Knowlton doesn’t have any police cars. Which is kind of a relief to me because town logos, police cars and yours truly have a bit of a rocky past.

As a young reporter, one of the areas I covered was Riverdale in Morris County. Looking to update the town’s image, a new logo was created with input from the history-minded folks. They proposed incorporating the historic Slater’s Mill into the design. (Does every town have a mill?)

An attractive image, it was used on borough letterhead, and placed on the vehicles the town owned such as DPW trucks. And police cars.

Journalists tend to be literal minded in both the language and practical matters. In a column I wrote about the logo and mill, I noted the mill’s long history. Right up to the recent past, when the building had been adapted for use as a restaurant, then a rock venue and by this time—to use the euphemism—a “gentlemen’s club.” Most people simply called it a strip club, go-go bar or, well, you get the idea.

So, with my rapier-like wit sharp as ever, I pointed out that Riverdale was probably the only police department in the state, indeed, maybe North America, in which the police cars had a picture of a strip club on their doors.

The longtime mayor of Riverdale and close personal friend, The Honorable Mike Dedio, did not quite see the same humor I did and called hurling many invectives. Many. Technically, I was 100 percent correct. “Well, you’re a 100 percent [invective]!” said Mayor Mike. Then he said I better not drive one mile over the speed limit in Riverdale. Then we laughed. I assumed that was a joke, but I did pay close attention to the speed limit for a while. He got over it. I heard later he even made the same observation to other people for a laugh.

I can’t think of any unintended consequences of the picturesque Delaware Water Gap, so I think Knowlton’s new look will be a good fit.