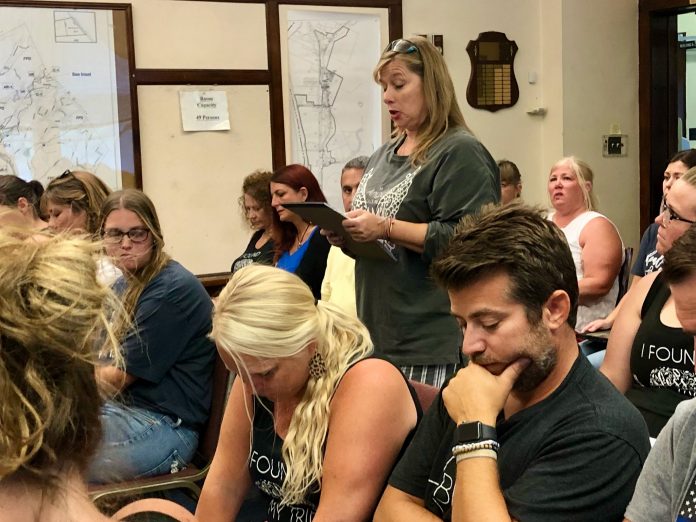 More than 50 people crowded the August Knowlton Township Committee meeting to voice their support of Hayden’s House of Healing on Ivan Road.

Many of the attendees at the meeting spoke about the children they had lost and the support they received from Hayden’s House.

A small fire earlier this year at the house—a retreat for grieving families who have lost a child—resulted in questions about the facility and its compliance with zoning regulations.

Several committee members offered their strong support of Hayden’s House but added that it is imperative that the facility meet fire and zoning requirements for the safety and health of its clients as well as its neighbors.

Hayden’s House co-founder Rob Dorsett said the organization was blindsided by the inspections that followed the June fire. Restrictions were placed on the facility by the township’s zoning official.

Mayor Adele Starrs explained that the restrictions were not intended to be punitive, rather, they were there for the safety of its occupants as well as first responders who would answering emergency calls. Starrs added, however, that she supports the work of the organization.

Hayden’s House of Healing was founded by Rob and Ady Dorsett after their infant son Hayden died in 2012 as a resource for bereaved parents who have lost a child. The organization purchased the house on Ivan Road several years later as a retreat site, where programs and resources would be offered.

Rob Dorsett said there are never more than 14 people at the home at any given time. However, given the nature of the activities of the facility, the zoning and fire officials felt that the house needed to be in compliance with regulations beyond those of a single-family residence.

Because Hayden’s House had never applied for the variances, it had escaped notice until the recent fire when zoning officials got involved. Starrs said issues such as fire safety, septic and on-site parking needed to be consistent with local and county requirements.

Township Attorney Leslie Parikh said the matter was turned over to the Board of Adjustment, which has the authority to issue variances for non-complying uses and exemptions.

Committee member Frank Van Horn emphasized his support for Hayden’s House, emphasizing that the regulations are in place for the safety of all those involved.