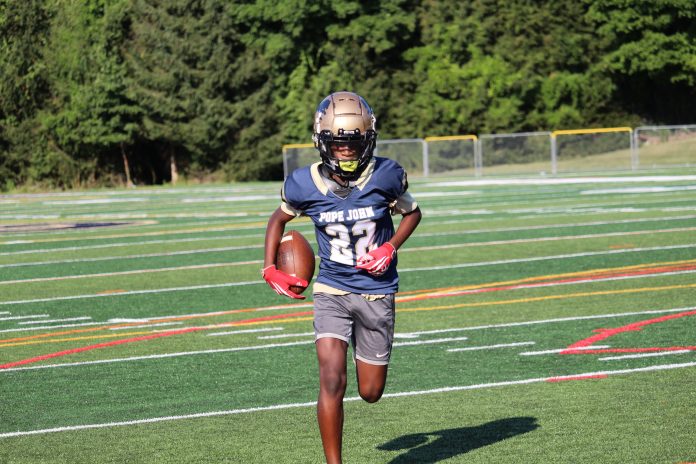 Pope John Football has always had a glorious reputation around New Jersey. From being a top program in the state under ex Head Coach Vic Paternostro for 44 years, it is hard to imagine the team having the struggles it has in 2022. This may not be the case this season as Head Coach Dom Gaston is ready and very excited to see how the program can once again be the powerhouse it once was.

Coach Gaston enters his 2nd season as the head coach of the Lions. He and his coaching staff want the players to understand that the program they play for isn’t just about football, it’s about all of the players and coaches that have come before. It’s about the legacy of the program and the family that is created each year.

The tough part of this season will be the youth of the team. With only 5 Seniors, Sean Line, Nick Castorina, Cardin Madry, Alex Gori, and Justin Fontana, the team relies a lot on Sophomores and Juniors.

“We have 4 new starters on the offensive line, 3 new starters on the defensive line, and only 2 returning players in our secondary, 1 at cornerback and 1 at safety,” said Coach Gaston. “With a battle at quarterback between [Sophomore] Tyler Houser and [Junior] Chris Dietrich and a new running back in [Sophomore] Tylik Hill, it will be tough, but we’re a young competitive team and we’ve gotten a lot better since the 1st day of practice in June.”

One of the biggest goals for the program is to win games which is obvious after a 1-9 season last year, but Coach Gaston also wants to see everyone on the team to grow and learn as much as possible.

“My goal is for us to go 9-0, and we can achieve this by everyone getting 1 percent better every day,” said Coach Gaston.

Senior Justin Fontana is very excited for the upcoming season in which he and the team look to go out and win games, but also Fontana wants to enjoy the moments that the team creates since it will be the final time that he puts on the pads as a Lion.

“This year, I want to be the best player I can be,” said Fontana. “It’s the last time I will wear Pope John on my jersey for football and I want to make it the best time. I will play in college, but the focus is this year and getting the younger guys ready to do even greater things than we will accomplish this season.”

Freshman Vincent Giacchi is ready to begin his career and looks up to the older guys as they help him to become a better player.

“The older guys are great with us, the Freshmen, by helping us because they want to see us succeed long after they have graduated,” said Giacchi. “They’re true mentors. For example, Junior left tackle Justin Platt teaches me tricks and gives me a better understanding of how to play the game.”

Pope John football is rebuilding its glory and in the coming years will be back as a known powerhouse in the state of New Jersey. The motto the team leads every game with is that faith, family, and football are work together to bring out the best in any team. It’s not the football that will bring the team back to the glory days, it’s the family that plays the football.