North Warren Football: A Program that Will Fight for Wins 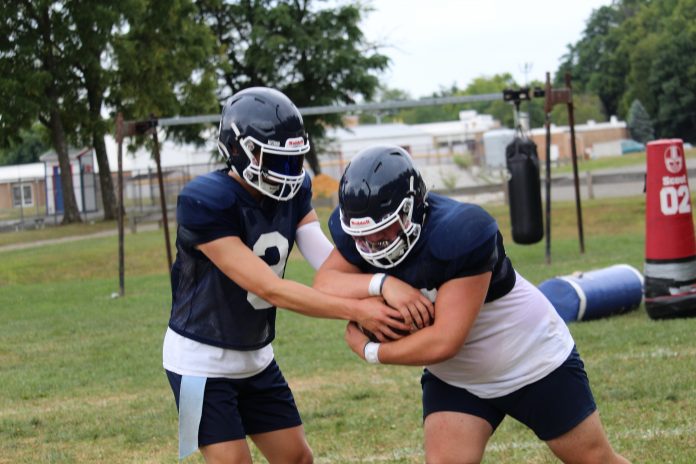 North Warren football isn’t the biggest and best program in Warren County, but the Patriots take pride in saying that they are one of the toughest teams to play. When opposing teams see the Patriots on the schedule, they acknowledge that it will be a tough game to win.

The season begins in June with an instructional football camp which helps the team become a team. The players get to know their teammates and learn the strategies used in the upcoming season.

After a 10-day blackout period of communication, the team begins 3-day a week practices that are voluntary in July. Patriots Head Coach Eugene Fluri explained that the Seniors provided great leadership throughout the summer.

“This group [of Seniors] have been together since the midget program,” said Coach Fluri. “They took charge and helped everyone on the team which is what we want in our program.”

Depth has always been a challenge for Coach Fluri and the Patriots because the team only has around 40 players. In a sport like football, numbers like the Patriots have can really push the starters to overuse themselves which results in falling apart in the 4th quarter.

A new start means to forget everything that has happened and focus on the future. Coach Fluri uses 0-0 to tell the team that “the prior season means nothing when you get on the field in our 1st game.” Coach Fluri also explains that 0-0 means that any team can write its own destiny.

The Seniors all are excited to play again, and it doesn’t matter to them that last season finished with the Patriots under .500, it matters that this season is special in the sense that they fight in every game.

“It would mean a lot to us as Seniors to get wins,” said Senior Richard Morro. “That’s obvious of course, but winning is always tough. I think this season we really could compete and win games. Our biggest goal as Seniors is to encourage the younger kids to want to play, whether we are winning big or losing big.”

Senior Etian Rizvani wants to help the younger guys on the team to have a good work ethic. Rizvani is also very pleased with how well the team looks this season.

“If you want to achieve in this sport, you have to have a good work ethic,” said Rizvani. “We have all worked hard to prove that we are the team to beat this season, and I’m very excited to see how the younger guys can help us do just that.”

Senior Justin Bende and the entire team love to see students and faculty at their games because it makes them feel like they are appreciated for what they do in a game that they love.

“It’s amazing to have people appreciate what you are doing,” said Bende. “The band playing, the cheerleaders doing their routines, it feels like a real football atmosphere that you hear about with big name schools. It gets us motivated during a game.”

The motto that the Seniors have the challenge of passing on the younger guys is faith in each other, faith in the coaches, and faith in the program while having a positive attitude which leads the team to bond under difficult and sometimes seemingly impossible circumstances.

North Warren’s football program has gone up and down since Coach Fluri joined in 2016. With 6 years now under his belt, Coach Fluri is ready to lead the team back to glory with the help of his coaching staff, and with one of the most important parts of a team, the players.

Every player on the team has a role, and whether that be the starting quarterback, Senior Jared VanValkenburg, or a Freshman, Anthony Fredda, the Patriots need everyone to fight like no other team.