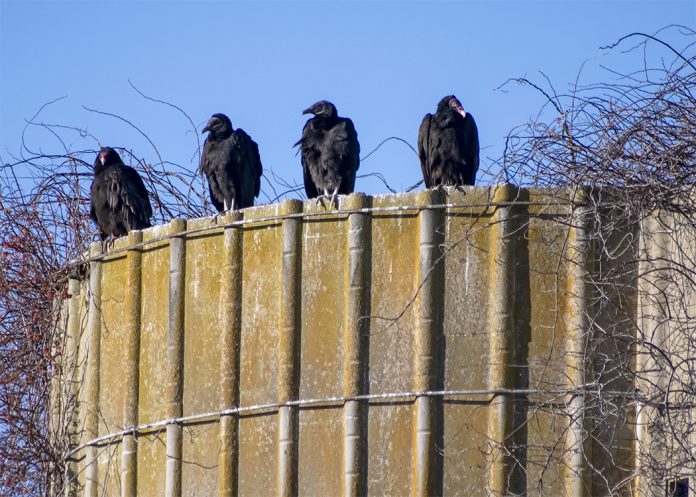 It is not uncommon to witness them soaring effortlessly in the sky, but how much do you really know about vultures?
Thanks to Hollywood, the sight of a vulture circling overhead can fill some with a sense of dread and impending doom, but there is nothing to fear and much to thank them for.

Vultures are among the world’s largest flying birds. They are divided into two categories: Old World Vultures, and New World Vultures. Though they may share a common name, they are not closely related.

So how do you tell the two apart? The bald red head of the Turkey vulture is a dead giveaway when they are stationary, but what about in flight? The Black Vulture is entirely black with silver-gray patches at the tips of the wings. The Turkey Vulture has bi-colored underwings.

It is not uncommon to find Turkey Vultures and Black Vulture sharing a communal roost. Both types of vultures are highly social and family oriented. These communal roosts may consist of just a few birds or into the thousands.

While many animals will take advantage of grabbing a quick meal from a carcass, vultures have taken it to a different level. Some scientists have referred to them as “obligate scavengers”.

In fact, the Turkey Vulture may be the only carnivore largely lacking the ability to kill its prey. Both are large-bodied birds with a wingspan upwards of six feet.

Contrary to their portrayal in old westerns, vultures do not circle above while waiting for their would-be dinner to expire. What they are doing is circling in thermals of hot air and updrafts in the atmosphere.

There is a tradeoff for being a large bird with an enormous wingspan: vultures are unable to sustain powered flight for long periods of time. In other words, they cannot flap their wings very long to fly.

Instead, they depend on thermals and updrafts to get them high in the air and glide once they get there. While this method of flight has clear disadvantages, it is highly energy efficient, allowing vultures to scout vast swathes of land in search of carcasses.
One may wonder how vultures find their food from such lofty positions in the sky and the answer is fascinating. Turkey Vultures have a keen sense of smell, which is unusual in the bird world. They can smell a carcass from over a mile away.

On the other hand, the black vulture lacks a highly developed sense of smell but makes up for it with keen eyesight. In some ways they may depend on each other to find food. Black vultures can spot a group of Turkey Vultures eating and will swoop in and displace them.

To combat this, Turkey Vultures often choose smaller food that they can gulp down quickly.

No matter how they acquire their food, both types of vultures provide a tremendous service to us all. By swiftly disposing of carcasses, vultures prevent the spread of bacteria and disease. Because of high acidic levels within a vulture’s stomach, they are able to consume carcasses laden with deadly bacteria such as anthrax and viruses including foot and mouth and rinderpest with no ill effects.

They are the HAZMAT crew for us all!