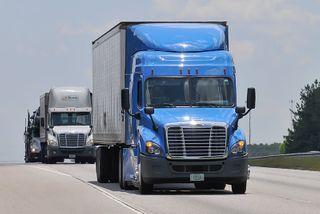 The good news is that the state Department of Environmental Protection will provide monitors to the township to establish a baseline for air quality before completion of warehouses in nearby communities, which are expected to dramatically increase truck traffic through Knowlton.

The slightly less-than-good news is that the township will need to find a qualified laboratory to interpret the findings.

“We heard back from the DEP about the monitor so we can get a baseline of what our air is now before the warehouses go in,” said Mayor Adele Starrs.

She said that according to the DEP, emission standards apply to individual trucks and other diesel machinery and are subject to the requirements that were in place at the time they were manufactured.

But the state is in the process of completing a five-year plan for diesel emissions in New Jersey.

“Our results could inform that project,” Starrs said.

The state would provide hand-held monitors that could measure particles as small as 1 micron. The township currently has a stationary monitor in place that was installed to measure pollutants from the now-shuttered coal-fired power plants across the Delaware River in Pennsylvania. This monitor, however, does not measure particles smaller that 2.5 microns, Starrs said.

The microscopic particles generated by vehicle exhaust, frequently referred to as PM 2.5 because of their size, indicating the size, include carbon dioxide, carbon monoxide, nitrogen dioxide and nitrogen monoxide. The particles, which measure 2.5 microns or less, can also include water vapor, mercury and unburned fuel. For comparison, there are 25,000 microns in an inch.

While the full scope and timetable of the warehouse construction has not yet been determined, Starrs said state and county officials have estimated the projects could add as many as 15,000 vehicles to Route 46 through portions of Warren County. The same roadways currently see a daily traffic volume of between 11,000 and 14,000 vehicles, according to the Warren County Transportation Master Plan.

The committee agreed to move forward with contacting nearby universities and other institutions for assistance in interpreting and recording the data.