Phalon’s File: The Debate that Never Was 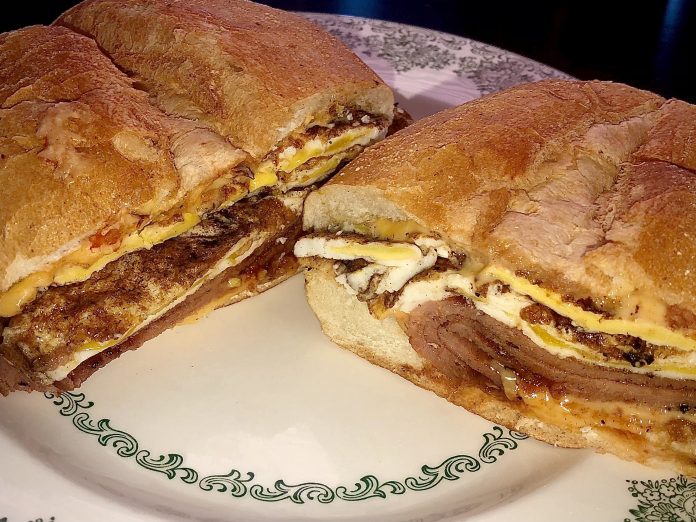 It’s time to put this controversy to rest. Every day there is another post on social media about the long- running battle in the minds of some people between Taylor Ham and pork roll. There is none.

This dispute is actually more of a media—social or otherwise—invention than an actual debate. Not unlike the term “fuggedaboutit.” That’s only used by people outside of New Jersey to mock people who live in Jersey, people who simply don’t say that, at least not with that affected inflection.

And we spend even less time arguing about processed breakfast meats. But there is a division, and it’s worth addressing.

Taylor Ham has become as generic a term as Sheetrock, Dumpster and Styrofoam—words that are actually copyrighted names but have evolved into common terms.

The meat on a standard Taylor Ham, egg and cheese sandwich on a bagel could be pork roll. Many bagel stores and delis use pork roll. Not that any deception is intended. It’s just more of a North vs. South Jersey thing. The demarcation of the two regions used to be pretty easy. New Jersey used to have two telephone area codes, 201 in the north, and 609 in the south.

North Warren has often straddled that distinction. Although Warren County is clearly located in the north half of the state, South Jersey still creeps up the Delaware. Which I suppose is the reason our Tostitos promote the Eagles rather than the Giants.

Pork roll was and still is the predominant term in the south, but enough people say, “Taylor Ham” to not draw any attention. Say “pork roll” sandwich in North Jersey, however, and you’ll get the same look you’d get from an Ohio convenience store clerk if you asked for a bottle of “soda.” They’d say, “Did you mean ‘pop’?” I got the same look when I ordered a Taylor Ham, egg and cheese (on an everything bagel) in Seattle. We didn’t even get to the ham debate since in lieu of a non-existent bagel, they offered me a scone. They asked, “What’s a bagel?” while I asked “What’s a scone?”

The Taylor Ham/pork roll debate is really a New Jersey thing that spills over a little into New York and Pennsylvania. Any place west or south, if you try to describe it, they’ll just say, “Oh, I think you want Spam.”

But these states should be aware that pork roll—a New Jersey invention—played an important role in the American Revolution. Tightly packed rolls of minced ham and other unspeakable ingredients were carried by American soldiers during George Washington’s Delaware crossing and sustained them during the Battle of Trenton in the days after Christmas in 1776.

John Taylor, a Trenton businessman and also a state senator, opened a factory to produce Taylor’s Prepared Ham in 1870. But he was forced to drop the “ham” from the name when Pure Food and Drug Act found Taylor’s product did not meet the definition of “ham,” which does sound a little scary.

Taylor changed the names to Taylor’s Pork Roll. But other products were already on the market with term “pork roll,” and Taylor sued but U.S. federal court ruled “pork roll” could not be trademarked.

So, pork roll, Taylor Ham. Just remember the next time you sink your teeth into either one, they helped create our great nation!