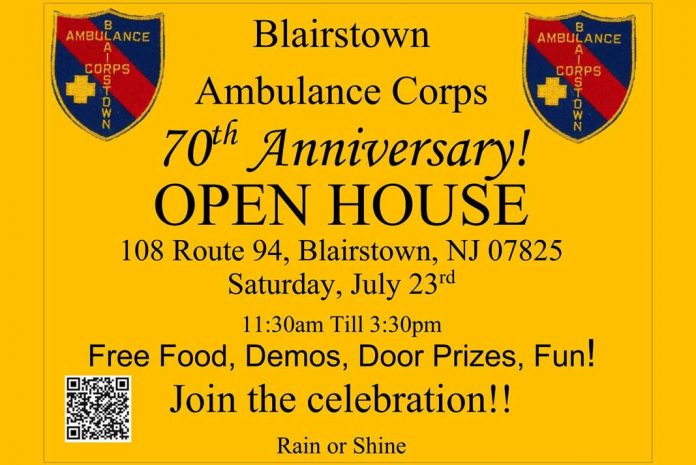 The Blairstown Ambulance Corps is celebrating its 70 years of serving to the Blairstown area. The celebration is an open house, rain or shine at 108 Route 94, Blairstown, NJ.  Everyone is invited to join in the festivities. There will be free food, live demonstrations and door prizes.

The tradition started in 1977, when The Blairstown Ambulance Corps celebrated its 25th year of service. The open house and booklet were established to honor the men and woman who keep the community safe. The next open house was in 2002 for their 50th anniversary.

The Blairstown Ambulance Corps (BAC) is a nonprofit organization established in 1952 after a resident fell and had to wait two hours for help. A group of concerned citizens decided to start a volunteer ambulance and rescue squad. The squad covers Blairstown, Hardwick, Hope and parts of Frelinghuysen.

The photos and interesting facts have been provided by Christine Beegle of the Blairstown Historic Preservation Committee.  Thank you, Christine.

The Blairstown Ambulance Corps is looking for men and woman 16 years old and up to join the team, no experience is necessary, training will be provided.

Membership information can be found at http://46rescue.org/about-us/