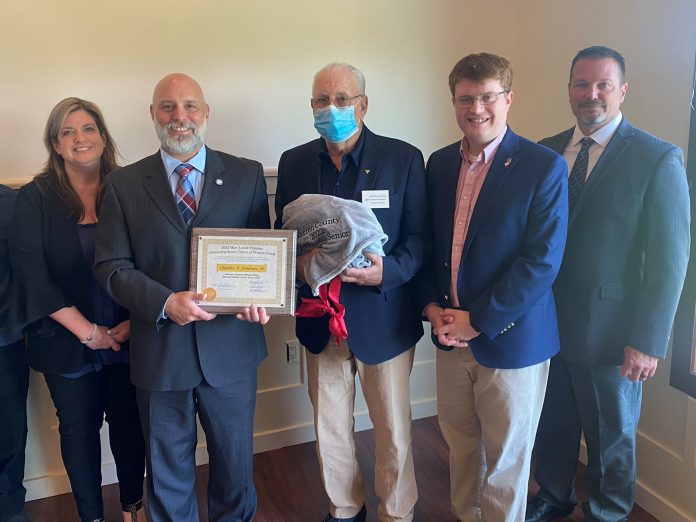 “Charlies is an endless source of energy; you can see him at every town function and is well known for his efforts throughout Warren County and New Jersey,” wrote Allamuchy resident and 2021 Outstanding Senior John LaPadula in his nomination of Fineran.

“He is either a volunteer or officer for most Warren County environment agencies and parks. As the (Allamuchy Rownship) Open Space Director, he has created a network with various governmental groups and organizations, as well as various conservancies,” LaPadula continued, noting that Fineran has obtained numerous grants for trails and road cleanups, and has organized and helped run the township bi-annual cleanup and electronics waste disposal day.

LaPadula described Fineran, who retired from NJ State Police as a sergeant in 1995, as an “honorary member” of the Allamuchy Seniors Club who attends meetings and educates his fellow seniors on the environment, wildlife, and historical sites in and around Warren County.

One of Fineran’s most significant accomplishments was being a core committee member who worked with Allamuchy’s municipal government and Board of Education in acquiring the Rutherfurd property – which more recently had been a retirement home for nuns known as Villa Madonna – to expand the school district. The acquisition included the Rutherfurd mansion, now known as Rutherfurd Hall, an historical and cultural landmark in Warren County.

Fineran is president of the Allamuchy Historical Society and a vital member and volunteer with the Friends of Rutherfurd Hall, which raises funds to help acquire artifacts related to the site and to provide educational programs there.

He also serves on the board of the Rutherfurd Hall Foundation, which has raised hundreds of thousands of dollars for capital improvements to the mansion through donations and grants.

One of the things Fineran is most well-known for is taking thousands of photos of outdoor scenes, wildlife, and historic sites, that he shares with articles on Facebook and local websites.

Fineran thanked the county for the honor but noted, “I think it’s very important that we get a chance to recognize our seniors.”

He added, “Looking back over the years, time really has flown by. But it’s gone by well, with the different associations and different friendships that I’ve made in my journey through life, and I think it’s important that we share our lives with each other.”

The other nominees for Outstanding Senior Citizen this year were Joseph Epstein of Phillipsburg, Ronald Farber of Knowlton, and Claire Smith of Blairstown.

“This is a lot like the Oscars, where we have a lot of nominees, but every one is worthy of this award,” Sarnoski noted.

The award has been given annually since 1984 but was renamed in 2007 to honor Mary Louise Christine shortly before the 85-year-old community activist from Washington Township passed away. The Warren County Division of Aging and Disabilities Advisory Council conducts a search and identifies one older adult who characterizes the true spirit of the award. Nominations are accepted in the Spring each year.