Though Quite Common, Chipmunks are Anything but Ordinary 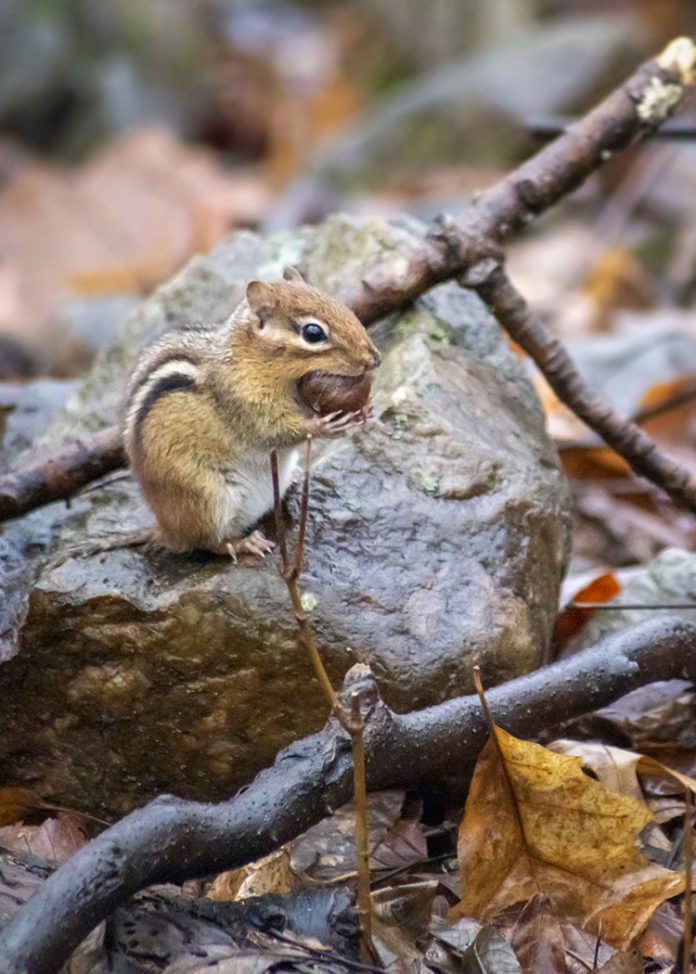 The Eastern chipmunk is undoubtedly one of the most charming creatures in our woodlands. Though they are quite common, chipmunks are anything but ordinary.

Long before reusable shopping bags were a thing, these tiny denizens of the forest perfected the art of toting loads of ‘groceries’ to their pantry using nothing more than expandable pouches in their cheeks. Chipmunks’ cheek pouches expand to three times the size of their head and they have been known to carry up to 70 sunflower seeds at a time.

This gives the chipmunk his signature ‘pudgy cheek’ looks but if that is not cute enough for you, chipmunks empty those pouches by pressing their front paws against their cheeks. They are capable of gathering up to 165 acorns in a single day and will store up to 8
pounds of food in their burrow for the winter.

The burrow is the center of the universe for the chipmunk. A burrow provides shelter from both hot and cold weather, protection from predators, a location to give birth to their babies and most importantly, a place to stash their precious larder of nuts.

For a tiny creature, chipmunks are master architects. Burrows are built with stealth at the forefront of their design. There are no signs of excavation around the opening to a burrow. Instead, if one looks carefully enough, they might notice a small hole about 1.5-2 inches in diameter, this is the entrance to the chipmunk’s lair.

The construction phase of a burrow commences with a chipmunk digging a working tunnel. One may notice dirt and debris around the hole but that is not important for it is not the entrance to the burrow.

Using his teeth to chop through roots and his nose to bulldoze dirt, the chipmunk will dig down between 1 and 3 feet. From there they will hollow out a chamber approximately 8×12 inches. This chamber will be lined with dried leaves and grasses. It is used for a place to sleep and to give birth, but it also may be utilized to store nuts. A separate chamber may also be constructed for storage.

Finally, a tunnel is dug from the side of one of the chambers. This will be the entrance to the burrow and can be up to 40 feet away from the original working tunnel. Since the tunnel is dug from the inside, there is never any trace of dirt that might divulge the entrance to predators. The dirt from the excavation of this tunnel is used to fill and plug the working tunnel. While simple burrows may have one tunnel and one chamber, more complex burrows contain several separate chambers and over 100 feet of tunnels.

Pretty ingenious for an animal that only weighs 5 ounces!