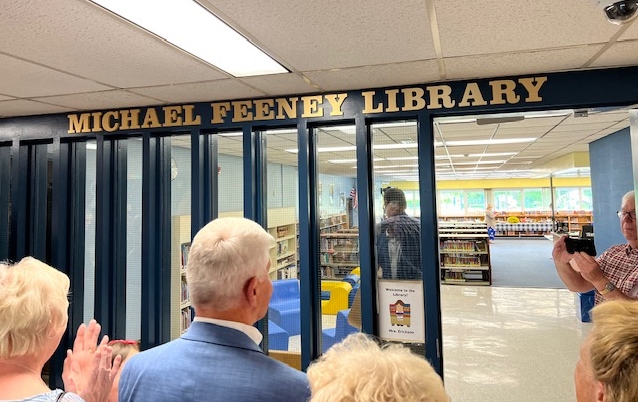 Touched by this gesture of appreciation and the many attendees who consisted of his faculty, past and present, extended family and the public, Michael Feeney spoke proudly of the many programs that he started inside the library.

Feeney reminisced about the Science Fairs where many volcanoes exploded in the library, the school store, and other library programs teaching speech, reading and math. He boasted about the day an astronaut came and talked with the children as well as the many luncheons and meetings all held in the library.

Feeney was born and raised in Northeast Pennsylvania coal country. He graduated from the Taylor-Moosic High School in Taylor, Pennsylvania in 1963.

In 1965, he was drafted into the army and served in the Vietnam War. Feeney was awarded the Purple Heart with Oak Leaf Cluster for wounds received in action. He was also awarded the Combat Infantry Badge, Vietnamese Service Medal, Vietnam Campaign Medal, and the Army Commendation Medal for meritorious service.

Upon his return to civilian life, Feeney earned a Bachelor of Science degree from East Stroudsburg State College in 1971. In September of that year, Feeney joined the Blairstown Elementary School faculty, where he remained for 37 years.

He attended Lehigh University at night and on weekends, graduating with a master’s degree in Education Administration.

Throughout 80’s Feeney held various administrative positions including Title 1 Coordinator, Director of Curriculum, Assistant Principal and School Principal in 1990. He remained principal for 13 years until becoming Superintendent from 2003 to 2008.

Feeney’s speech was gracious and funny. He thanked many of his colleague’s, including his secretary who he playfully described as his Radar O’Reilly from the hit TV show ‘Mash’. The Library Dedication was uplifting and concluded with refreshments.