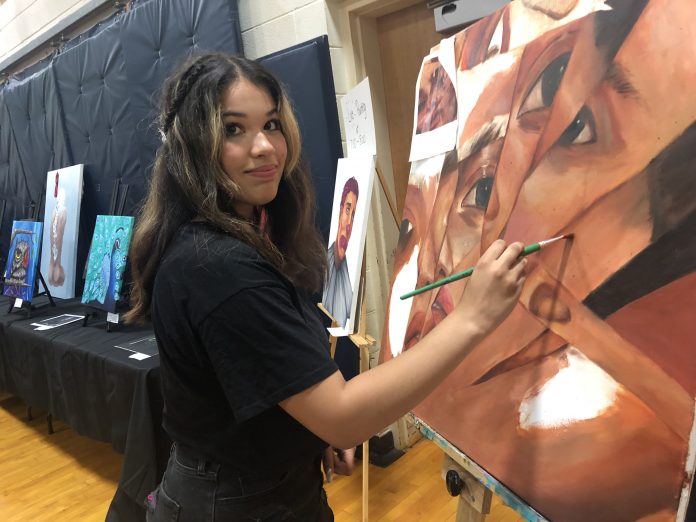 The project, which replaced yellowing glass and plexiglass at the main entrance to the school’s lobby, was created by more than 200 students and staff. Designed to evoked Van Gogh’s “Starry Night,” the mural is composed of hundreds of tiles, each designed, cut and crafted by the students, said wood teacher Kelly LaVerde, the lead coordinator on the project.

“More than 200 students were involved in this,” said LaVerde. “There were a lot of individual aspects to this.”

Work on the mural stretched not only over time, but over the interior of the school, as well. Kevin Morley, supervisor of Arts and Humanities at North Warren, said students and teachers had to coordinate the work on the mural with other activities in the vicinity of the lobby.

“One group of people cleared out, the next group was ready to take over,” Morley said. He added that even with the at-home learning that was made necessary by the Covid pandemic, the students continued to brainstorm ideas about the planning and execution of the mural.

Morley said the Warren County Cultural and Heritage Division provided a significant grant to fund the project, and added that support from the North Warren Regional Parent Teacher Organization and Blair Women’s Club also helped make the creation of the mural possible.

Ken Morris, who among other things, teaches wood technology at North Warren, described the process, which involved some groups of students designing and building individual frames for each pane of the mural, and others who worked with the acrylic substance that was used to create the colors of those frames.

Morris said the enthusiasm of the students involved could not be described sufficiently.

“They were always willing to work,” Morris said. “You could always find them here at work on it.”

Principal Jeanene Dutt said that over the years a number of ideas had been considered to spruce up the lobby, and the mural suggestion was well-received because it would involve so many members of the student body.

“What you see behind me is the work of the students,” Dutt said, as she dedicated the mural.

There is more to come, Dutt added, explaining that further improvements to the lobby area are coming.

“We want to make this a welcoming area,” she said. Renderings of a renovated lobby were presented, which included improved lighting and better furnishings.

“We’re not stopping here,” she said.