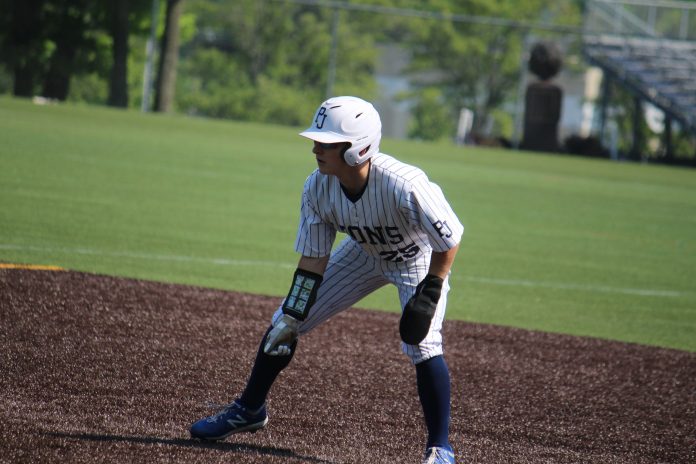 Anyone that has seen the movie ‘Miracle on Ice’ has heard the famous question – “Do you believe in miracles?” That’s what the fans were saying on May 17th as the Pope John Lions defeated the Roxbury Gaels 7-6 on a two-run walk-off single from Sophomore Brandon Weir.

Two other Sophomores would be the key to win as Sophomore pitcher Parker Rutowski held the Gaels to only one earned run. To set up Weir’s walk off single, Sophomore Marco Bonfiglio walked after a stellar 8-pitch at bat. The Lions were able to tie the game in the bottom of the first inning with a sacrifice flyout by Senior Frank Ciccone, scoring Senior Gabe Weir.

The score stayed tied at 1 until the Gaels added two runs in the third inning and another two runs in the fourth inning. With the Gaels leading 5-1, the Lions faced a tough predicament. The situation would get worse as the Gaels would add another run in the top of the sixth inning, but Rutowski would work his way out of the inning to limit the damage.

“Pitching well felt good since this one of the first times I came out and dominated,” said Rutowski. “I was a little nervous to pitch the top of the seventh, but I knew that we could hit and trusted my teammates to finish the job after I did my job.”

The Lions’ offense finally came alive when Gaels Junior pitcher Justin Ford couldn’t find the strike zone. Sophomore Mac Tufts was able to get on base to get the inning started and came around to score when Freshman Jack Portman stayed patient at the plate, drawing a RBI walk. Junior Brian McKenna would also be patient and win the battle at the plate with a RBI walk.

The Gaels would get out of the inning with only this damage done, but the Lions’ weren’t done. Going into the top of the inning, Lions Head Coach Sean Bierman thought about taking out Rutowski, but decided to keep him in. Rutowski shut down the Gaels one final time, giving the Lions an opportunity to complete the comeback.

Tufts, again, got on base to start the inning followed by Senior Nolan Niziol hitting the ball into the right-center gap for a RBI triple. McKenna came to the plate and doubled Niziol in and suddenly it was a 1-run game.

With two outs and a runner on second, Bonfiglio came to the plate. He had struck out both times in the game, but he worked the count to 3-2. Bonfiglio fouled off the next three pitches and stayed patient, walking to bring up Brandon Weir.

“I felt a lot of anticipation, waiting during Marco’s [Bonfiglio] at bat,” said Weir. “I’ve known Marco for a long time, and I know he could get the job done in stressful situations and that’s what he did.”

All nerves would be settled as Weir hit a hard ground ball off of the glove of the shortstop and into the outfield. McKenna scored easily, but Junior pinch-runner Ayden Alexander would be waved home by Coach Bierman in a close play. The throw was too late and the Lions ran onto the field in celebration.

The Seniors were exceedingly grateful to Weir for winning the game, but also felt happy to have won this big game at home and on Senior Night.

“It felt great, I was honestly excited to be out there,” said Senior outfielder Steve Mesaros. “I’m really glad we were able to battle and win.”

Gaels Head Coach Ryan Roumes was upset about the loss, but felt his team still played well even though they didn’t pull out the win.

“We hadn’t been playing too well lately, but we came and played well for a while in this game,” said Coach Roumes. “Pope John [the Lions] gets all the credit, they battled and they came back hard.”