INTERESTING FOLKS: Retired State Fire Warden Bob Wolff – Still on the Job as ‘Our Eye in the Sky’ 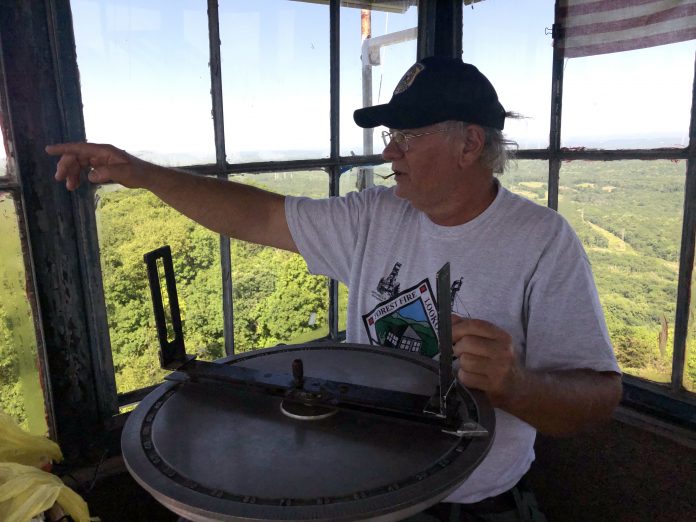 Most days, and lately more often than not, our Fire Towers have had available ‘fire observers’ stationed high above us in all of New Jersey’s 21 fire towers.

In Hardwick, Catfish Station sits at one of the highest elevations in New Jersey, at 1,555 feet (474 m), along the Appalachian Trail with a clear sight of the six other towers in North Jersey.

High Point is the most northernmost located at the apex of Sussex County and the southernmost is the one in Cape May at an elevation of only 15 feet above sea level.

Most were built about 100 years ago, including Catfish, which will celebrate its Centennial this year, on July 4th.

Models of them were erected on the grounds of the NJ Forest Fire Service’s Andover Office, off Route 206.

Besides being the place where you would obtain fire permits to legally start campfires on your property, the place is intriguing for all ages as the inside has historic forest firefighting equipment and some of the fire tower models outside have small aircraft attached.

The Command Tower for North Jersey is situated in Milton, New Jersey. Each was situated so as to have clear sight of at least four other towers. Like the fictional lighting of the Towers, in the movie “Lord of the Rings,” they can be lit up as warning signals but now those instances are reserved for celebrations like the planned anniversary of Catfish.

New fire observers get training by spending two days in the company of Bob Wolff, now a retired State Fire Warden who is stationed high above us at 65 feet, on sunny days, i.e., High Fire Danger days.

For a man heavily involved in his community, as well as the Stillwater Fire Department, this has meant that he has often spent each event he’s helped plan, in the Tower instead, as it’s a critical service to keep us all safe from wildfires.

He described his day as lasting from 10 to 6PM, unless an active fire is observed which requires them to stay on duty sometimes as late as 8PM.

It begins with a Morning Briefing by Radio, whereby he learns of the predicted weather and what aircraft, usually a helicopter, is available to help fight wildfires. .

-For insight into his job, he’s offered these texts, he’s called his ‘ramblings.’

Wed. 4/27: “Ramblings from Catfish Firetower. I moved to a little farm in Hardwick NJ in 1984, the II–following year I started working Catfish Firetower. After morning farm chores, I would don my backpack and hike 3 miles to the tower on the Appalachian Trail above Blairstown. Signing on the radio by 10am my watch over northwestern NJ would begin.

On a clear day the Catskills in NY are visible 70 miles to the north. A little closer to home, I can see High Point Monument, the highest elevation in NJ at 1,803′ is 24 air miles to the northeast, Culvers Fire tower, 15 miles north on the AT in Stokes Forest. Snow can be seen on the ski slopes in Vernon in the winter and early spring.

To the east is Frankin, Ogdensburg, Sparta and Milton Fire tower in Jefferson. To the southeast is Mt Olive trade zone and Budd Lake Fire tower, looking over Fredon, Frelinghuysen, Green and Allamuchy to the Allamuchy ridge. South over Blairstown, Hope to the Jenny Jump ridge and Mountain Lakes.

Rocking and rolling in Catfish Firetower today with winds in the 20 to 30 plus mph zone. I’m getting my own personal airshow watching hawks and blackbirds swoop, climb and dive in the wind. Sometimes I think they fly for the fun of it.

He speaks often of the human highway below him and all the brave souls who venture up to see him. They’re often through-hikers and have much to tell of their travels. He’s astounded that the only portions of the Appalachian Trail in New Jersey exist right here in Hardwick and he’s glad for the opportunities to have witnessed the sights and people this job has provided.