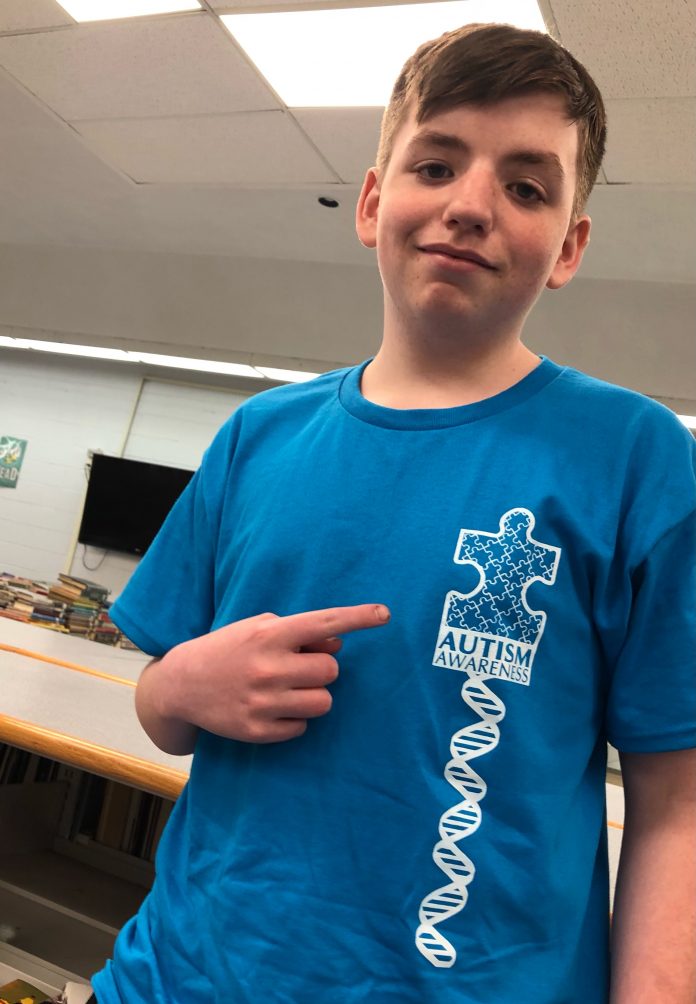 Bryan Reilly, of Blairstown, was awarded first place for his t-shirt to bring awareness to autism. And sales of shirts with his logo raised more than $600 for autism awareness.

Bryan was brainstorming ideas with a friend a couple months ago about some sort of community service when his pal mentioned the competition to design a shirt for autism awareness.

The project raised his own awareness, Bryan said. He had known about autism but he had never done a deep-dive into the condition.

“I knew a little about autism, but I learned a lot more about it,” Bryan said. He found that many people view autism similar to how he did before he started his project. A lot of people have inaccurate ideas of the condition and often base their opinions on stereotypes, he said.

“Some people learn differently,” Bryan said, adding that the disorder should not prevent anyone from reaching their full potential.

There is no single diagnosis of autism. People who are affected by it are described as being on the Autism Spectrum. It is a range of neurodevelopmental conditions that can manifest in difficulties in social interactions and challenges in communicating with others. While generally referred to as “autism,” the accepted clinical term in autism spectrum disorder.

The spectrum covers a wide range of people including those with high-support needs such as intellectual disabilities to people who have little to know obvious outward symptoms.

Some people with low support needs may show symptoms such as repetitive behaviors and some social skill challenges.

But overall, Bryan said, these conditions simply mean many people look at things differently than most.

That’s the message he hopes to communicate with his project. And he did it the hard way: No computer graphics programs. He created his design by hand.

With guidance from North Warren Special Services Supervisor Loren Marcus, started taking orders for the shirts. Eventually he sold 73 shirts with his design. Sales of the shirts raised $638.59, which he donated to the Organization for Autism Research in honor of the North Warren School district.

Bryan will attend North Warren Regional High School in the fall, where he said he plans to continue his art and focus on environmental issue.,