Eccentricities Abound Among the Non-Flashy, Seemingly Boring Members of the Bird World

By Kelly Simonetti, Contributing Writer
May 24, 2022 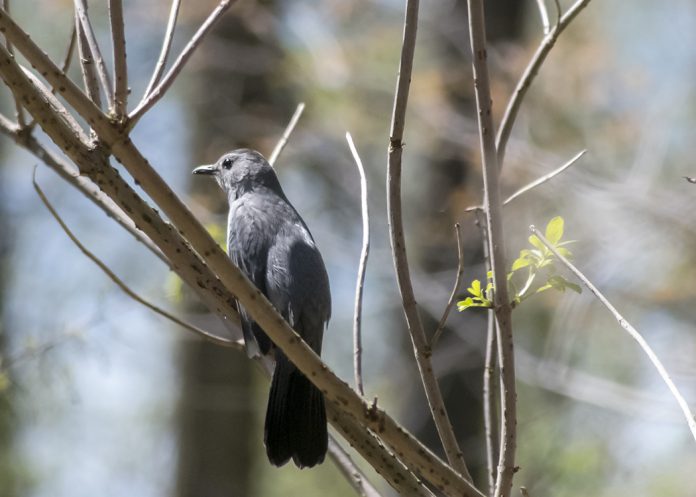 With the spring migration in full swing, one might notice flashes of color around the birdfeeder not usually seen later in the year, but do not discount the seemingly mundane!

Take the Gray Catbird for example. At first blush this member of the mockingbird family looks kind of boring and well…kind of gray. There is no blazing red of the Scarlet Tanager, no shock of color as in the Baltimore Oriole, or even the subtle hues of the Eastern Bluebird, but looks can be deceiving.

What the catbird lacks in color, they make up for in personality, which can only be described as eccentric.

Catbirds are your ‘crazy uncle’ of the bird world. If you happen to see one, do yourself a favor and pause, observe, and listen.

You will likely notice all forms of strange posturing; everything from tail fanning, wing dropping, puffing out his feathers and holding his head at angles that seem to defy nature.

The only thing quirkier than the posturing are the sounds the Catbird makes. Of course, there is the somewhat cat-like ‘mew’ for which they are named, but there is so much more. Catbirds will squeak and whine, gurgle, imitate other birds, frogs, and even mechanical devices, all at around 90 syllables a minute and for up to ten minutes at a time, without pause.

While other songbirds repeat set ‘phrases’ as part of their song, Catbirds may repeat noises, but not phrases. It is like they are making it up as they go along.

Unlike other songbirds that sing from branches in open spaces, staying true to form, the Catbird will mostly sing his eclectic song (if you can call it that) from the cover of a dense thicket.

But wait, there is more! Enter the Brown-headed Cowbird, North America’s most famous brood parasite.

A Brown-headed Cowbird never raises its own young, instead they lay their eggs in other unsuspecting songbird’s nests where the hatchlings will often outcompete their foster siblings.

Not so for the Catbird! Unlike other songbirds, a Catbird will recognize that the eggs are not her own and toss them out of her nest before they hatch. Catbird 1, Cowbird 0.

So please remember, what may initially seem ordinary is probably one of the most extraordinary miracles of nature one could imagine.