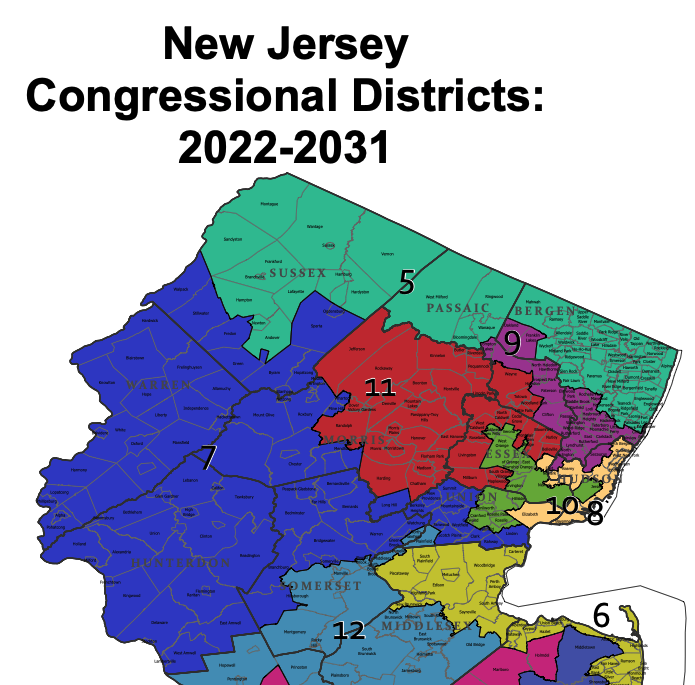 Primary elections take place next Tuesday, June 7th. It’s important for you to know the following:

Every 10 years, an American process occurs whereby each State conducts Redistricting in relation to U.S. Congressional and State legislative representation. According to POLITICO, “These processes take months to unfold in state capitals all around the country — and their results mold the balance of power in Congress for a decade.”

Careful analysis of population trends reflected in the recent U.S. Census, as well as voting trends, place the four towns in our focus area – Blairstown, Frelinghuysen, Hardwick and Knowlton in Congressional District 7, a District encompassing portions of six counties and 74 municipalities including 9 towns in Sussex County. This decision is made each decade by the Congressional Apportionment Commission, a panel of six appointed Democrats and six Republicans.

According to Bloomberg Government, the Commission approved the Democratic Congressional Map last December which they report boosts the candidacies of three of the four incumbent House Democrats because they are from politically competitive districts.

Stretching from the rural communities along the Delaware River to more urban Linden, in southeastern Union County, just 13 miles from Manhattan. It thus includes politically disparate towns; District 7 has been made more competitive.

New Jersey’s 7th congressional district includes all of Warren and Hunterdon Counties, plus parts of Essex, Morris, Somerset and Union. The district is represented by Democrat Tom Malinowski, who was first elected in 2018, defeating Republican incumbent Leonard Lance. According to Wikipedia, the district is known to be one of the 10 most affluent Congressional Districts in the United States.

John E. Wallace Jr., a former state Supreme Court justice who served as the tiebreaking chair of a panel said recently, he voted for the map submitted by Democrats after the commission approved a Republican-backed map in the 2011 redistricting.

“In the end, I decided to vote for the Democratic map simply because the last redistricting map was drawn by the Republicans,” Wallace said. “Thus, I concluded that fairness dictates that Democrats had the opportunity to have their map used for this next redistricting cycle.”